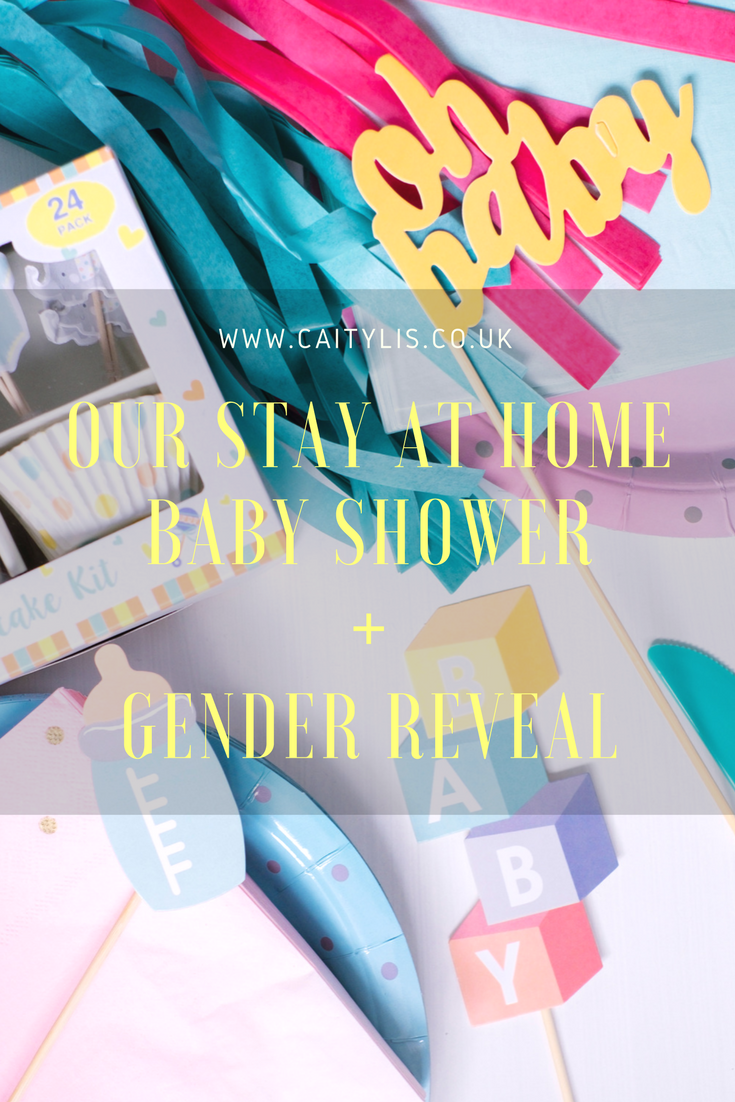 So if you follow me on any of my social platforms you might have noticed yesterday we had our Baby Shower and Gender Reveal! (It’s a boy BTW, you can read all about him on this post). We had such a lovely day and I just wanted to share our photographs and hopefully give you some inspiration and tips if you’re planning your own baby shower/gender reveal. I took many photos on my Fuji XT1, firstly I would always recommend a good camera if you’re wanting to photograph your own event like this, using a camera phone just doesn’t seem to give the same great detail, although I have added some iPhone photographs into this post that some of my guests have taken.

Since it’s the middle of August, we planned a BBQ hoping for some good weather, we managed to get a decent amount of sun and warmth into the garden though, you can never predict the weather here in England. You may think 22 weeks pregnant is a little early on in pregnancy for a baby shower, but obviously we didn’t want to wait months to reveal the gender (was hard enough keeping our mouths zipped for 2 weeks!), we wanted to throw a BBQ and who would really want to come to a December BBQ? And we certainly didn’t want to throw two separate parties, one for the gender and one for a shower, so we just shoved them together for this gender reveal/baby shower!

I and my MIL had been buying and picking up bits for the shower over the past couple of months. We were basically keeping in the theme of pink and blue, literally, almost everything was from either a Poundland/Home bargains or we managed to swoop things up from car-boots (including a candy floss machine she managed to find the morning of the party…! SCORE!). Lots of things like party cutlery, banners, and balloons we had just been purchasing and storing away since we announced the pregnancy back in April.

For the reveal itself, I purchased a pre-filled confetti large black balloon from Etsy to pop in front of all our guests! It was such a lovely way to show everyone the babies sex. I’m sure there are many versions of video of the reveal as it felt like every single guest had a camera on us whilst we were counting down before we *popped* the balloon to reveal the blue confetti.

Prepare yourself for a mountain of photographs here… 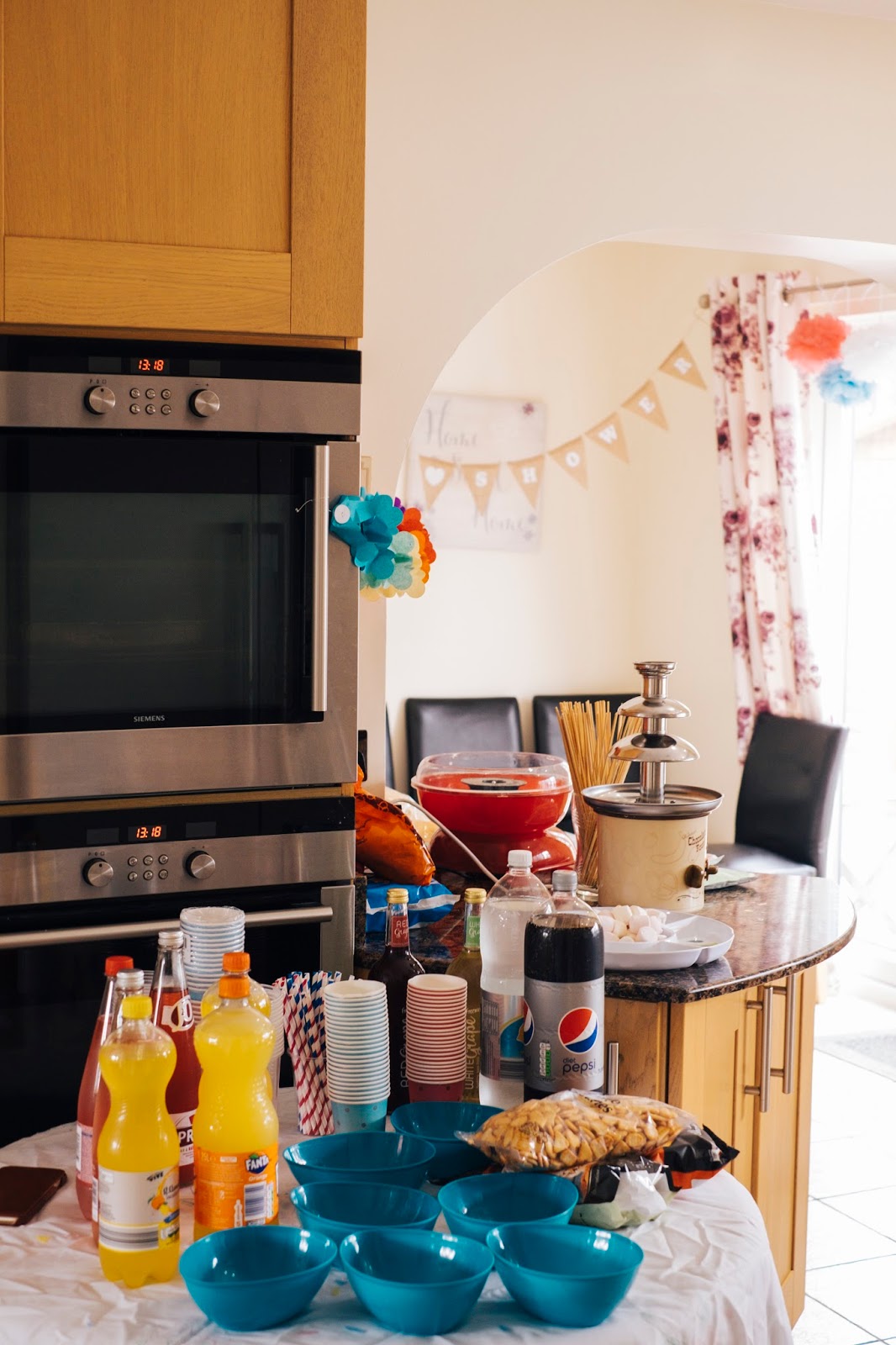 Before the mess and before the guests arrived! – Pink/blue cups and straws created super cute small details. 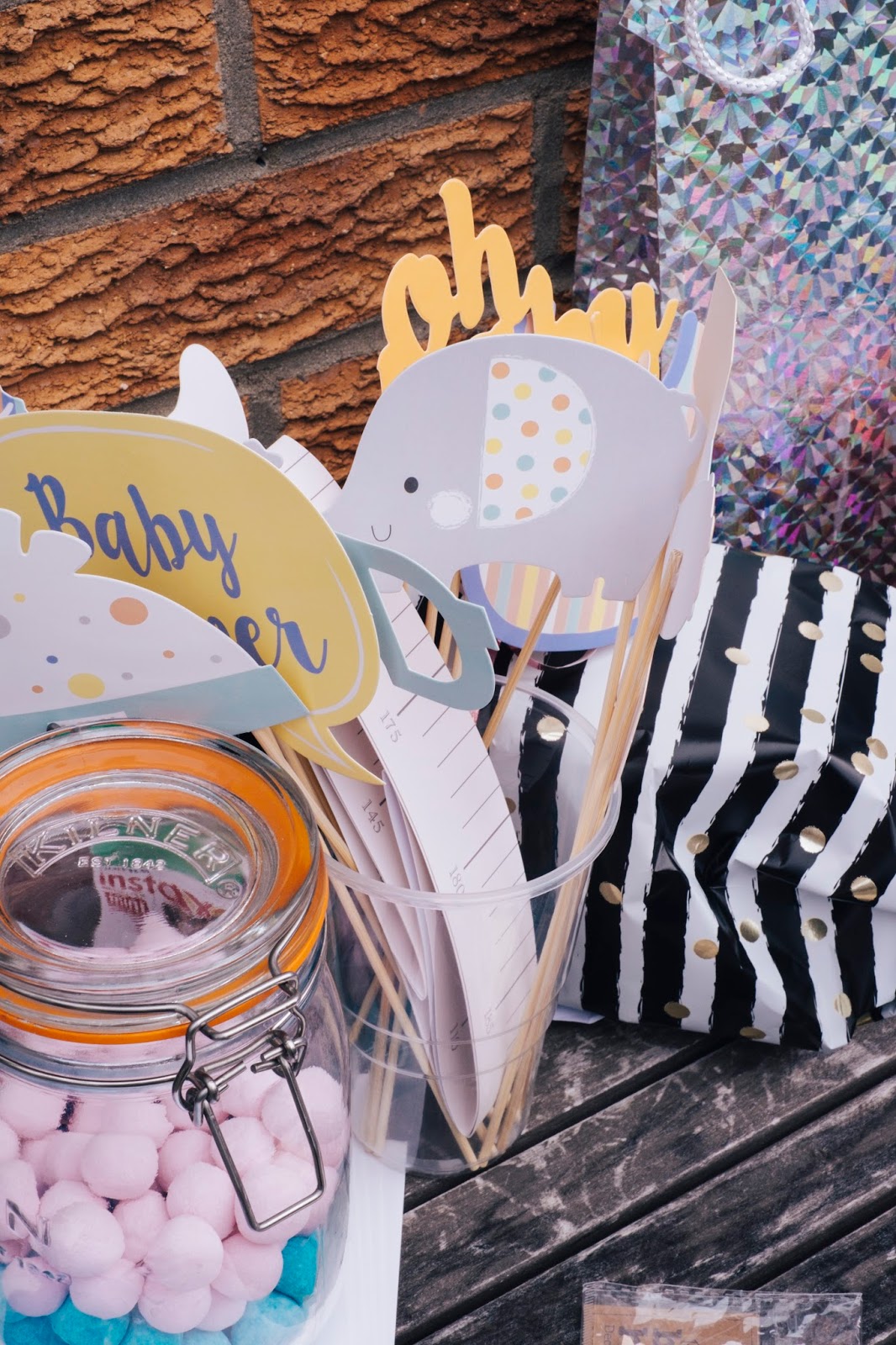 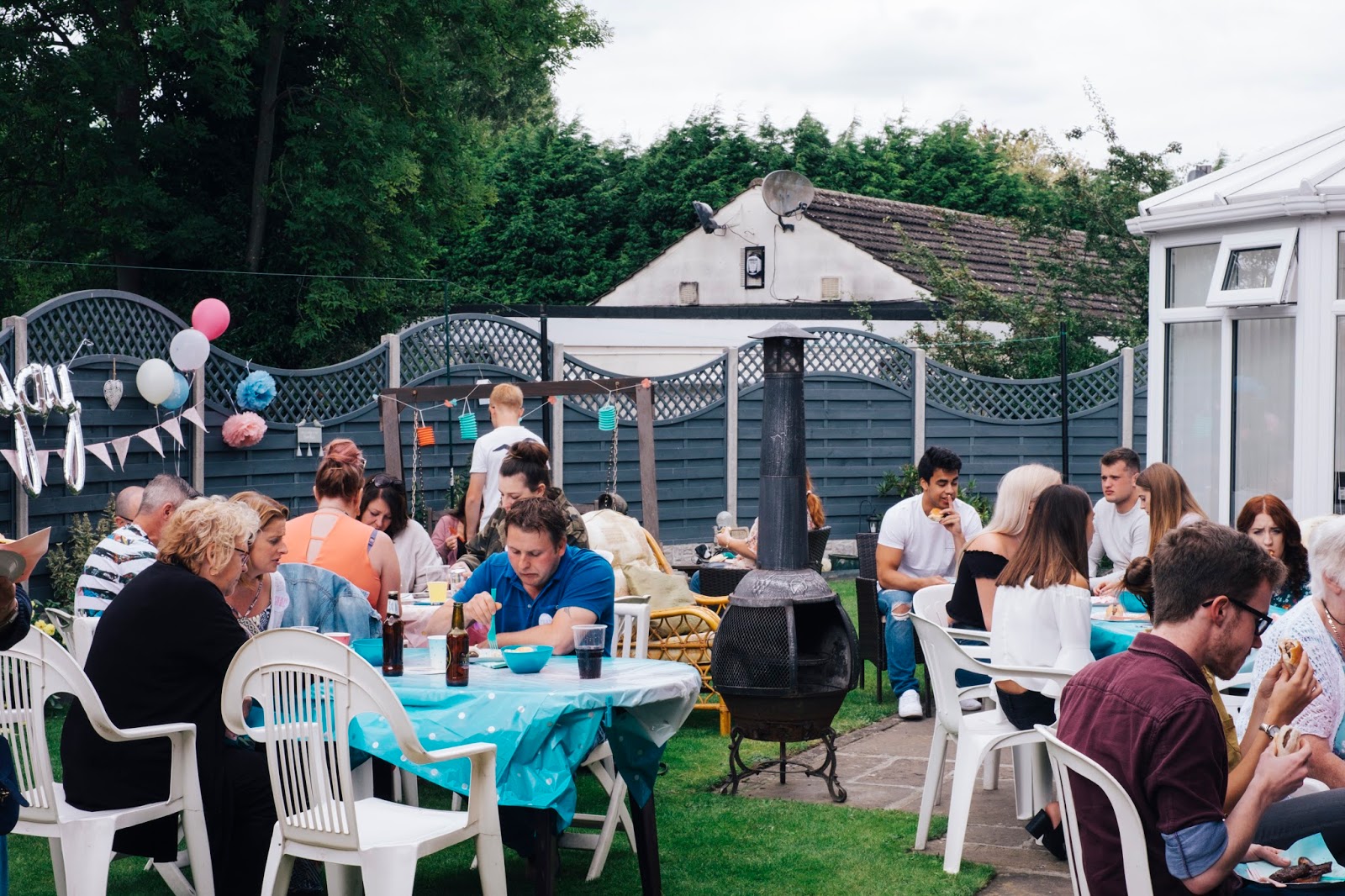 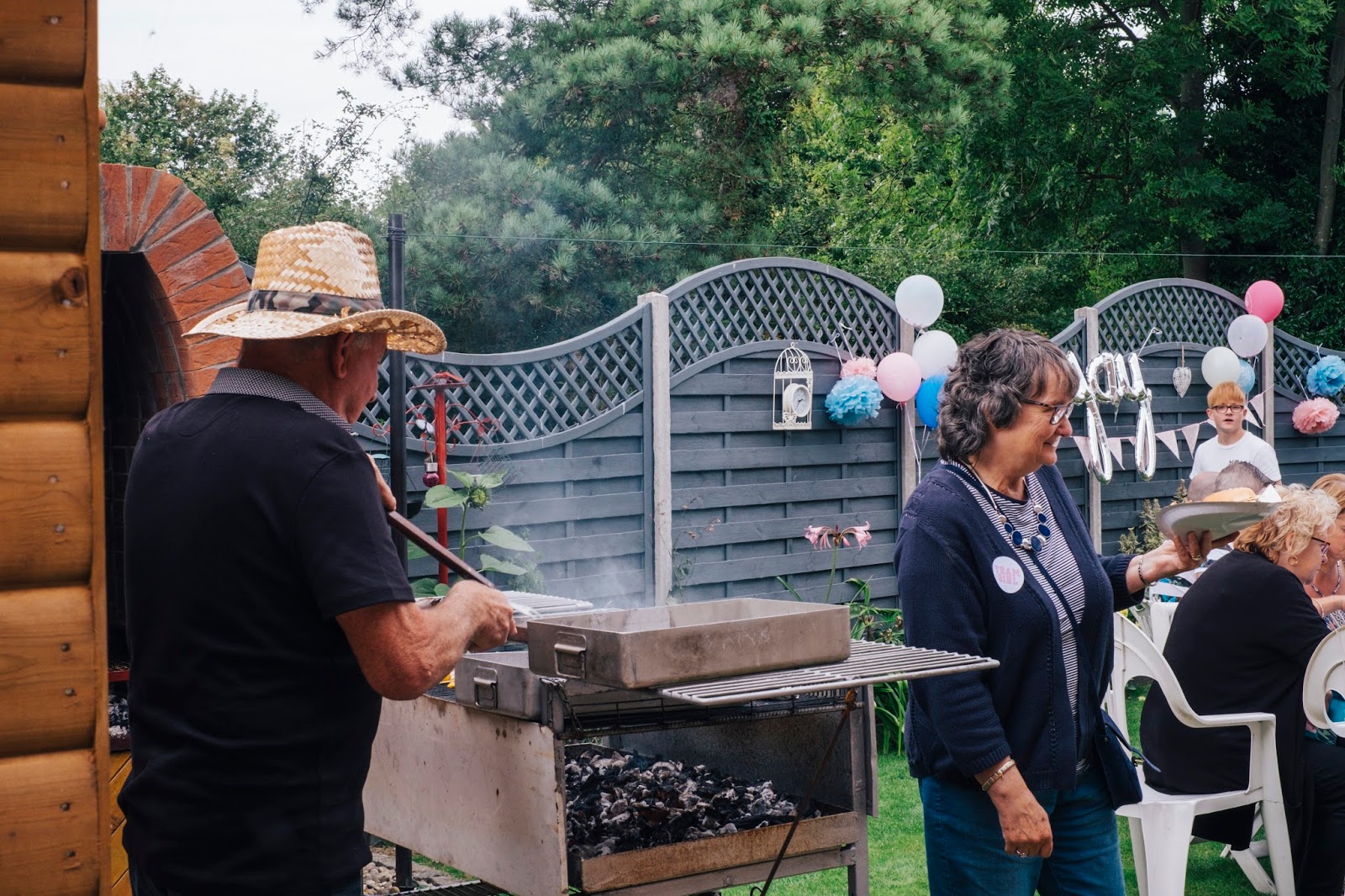 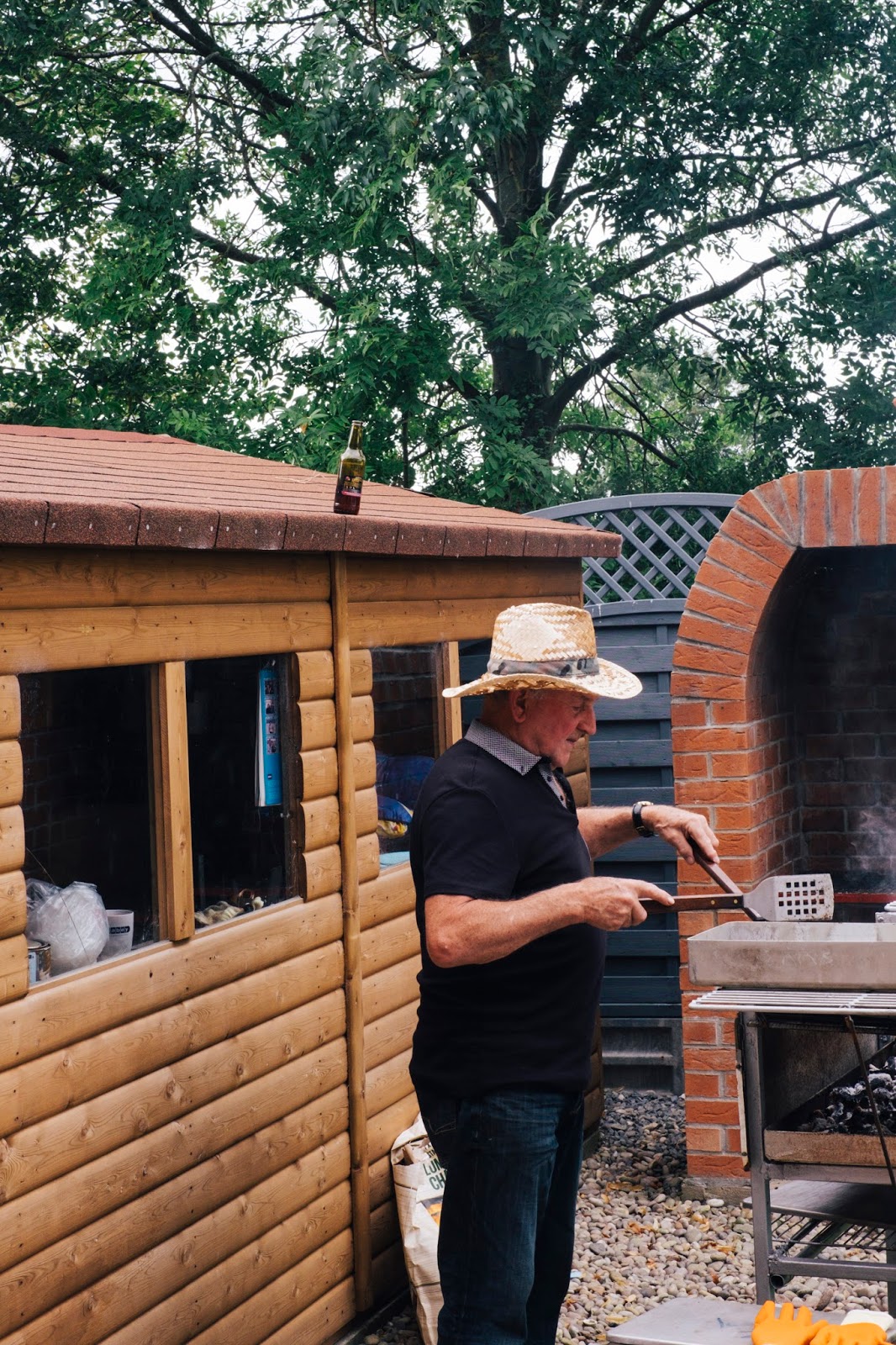 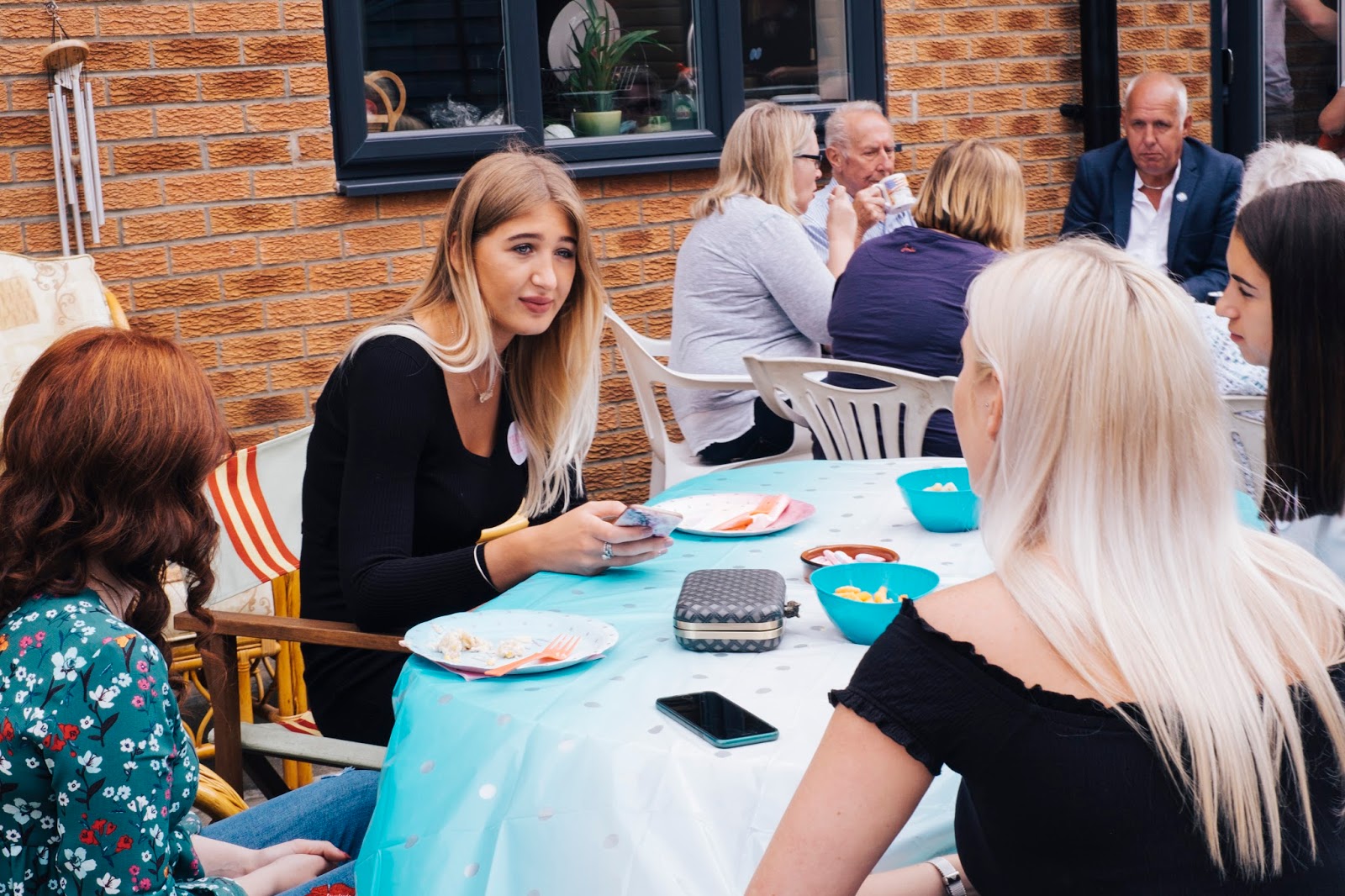 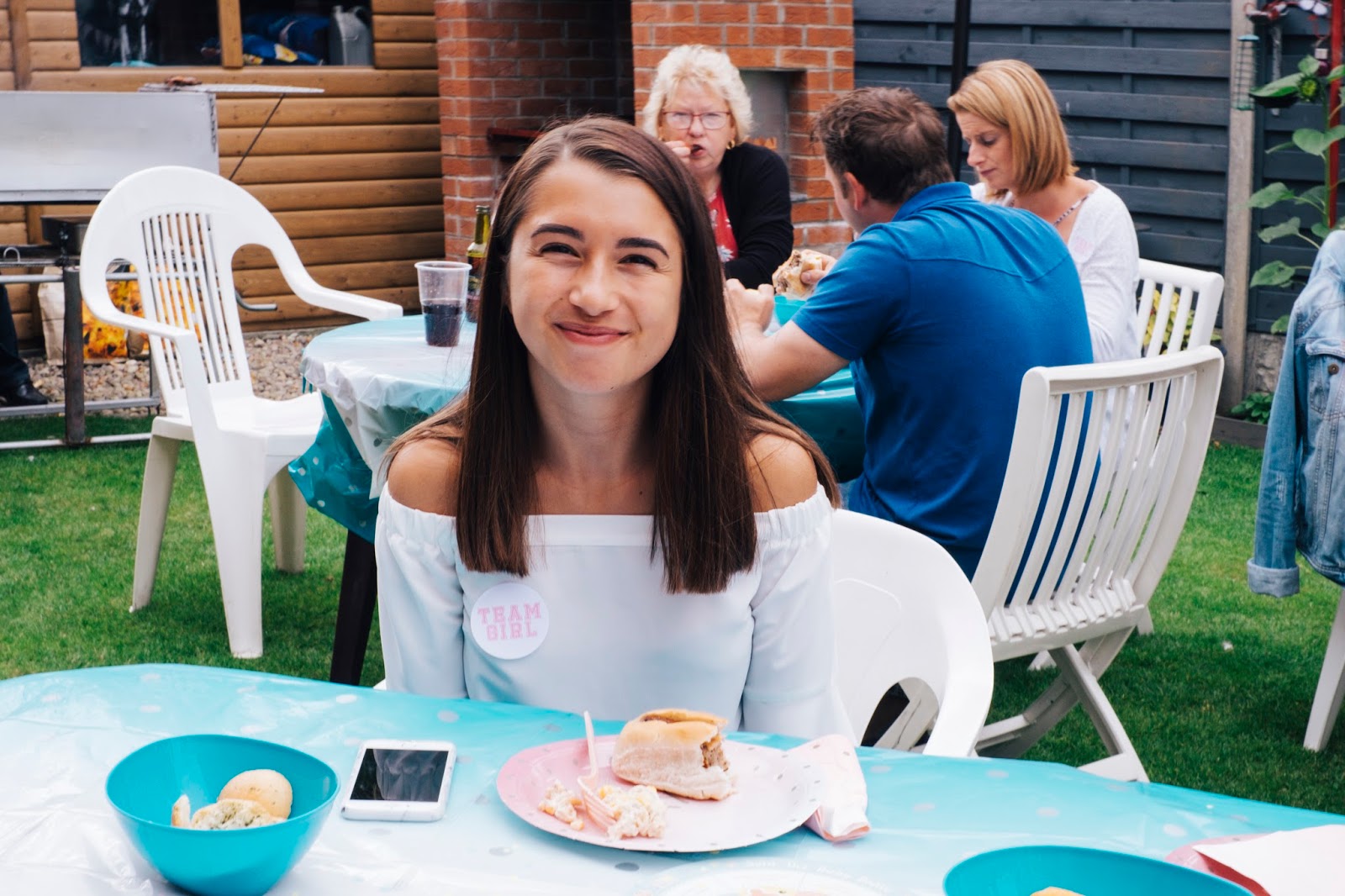 Family and friends all tucking into their food! Cute polka-dot table cloths and plates are from PoundWorld 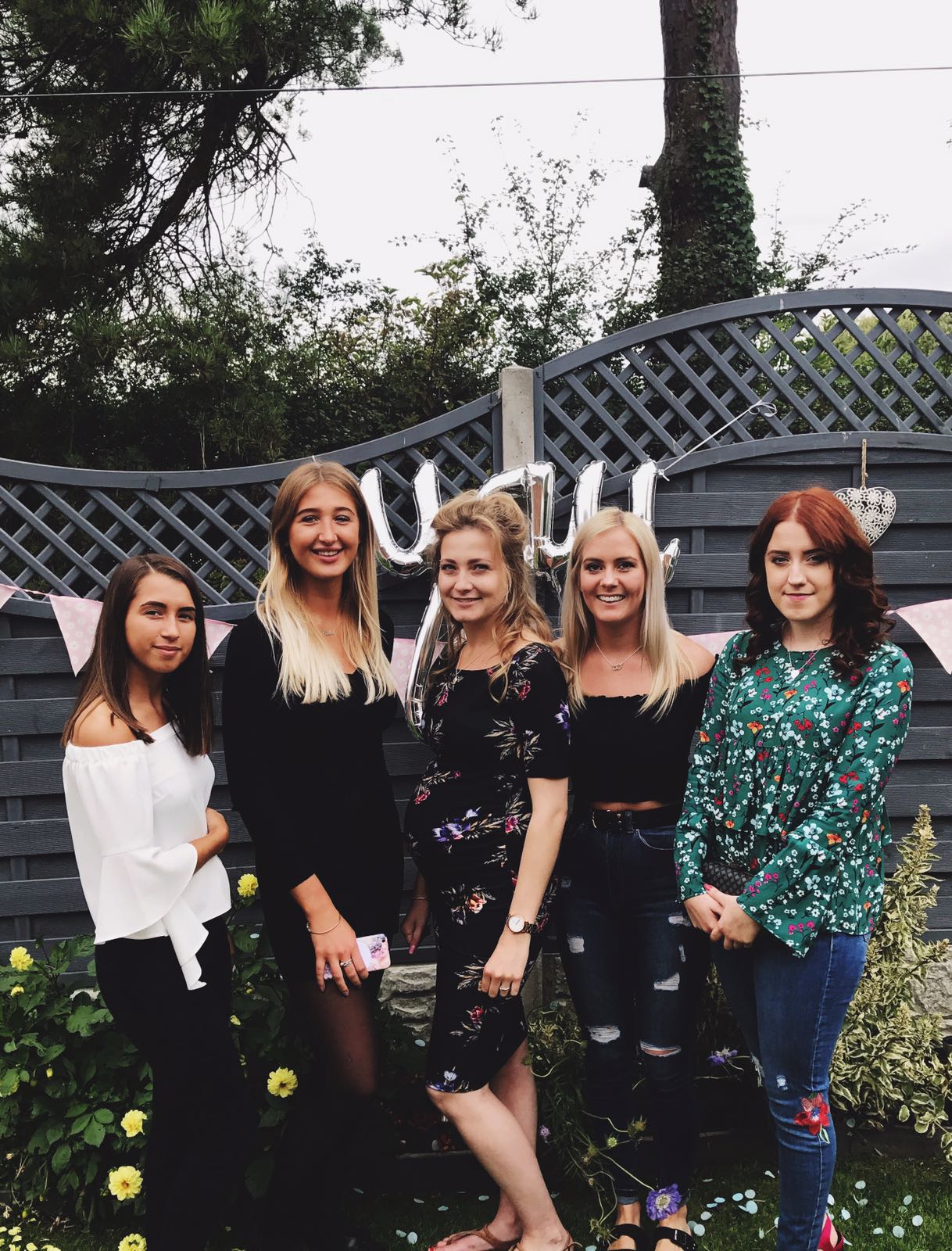 I made a little place for photo taking and to use as a background for when we popped the balloon. The ‘yay‘ balloon was from Paperchase. I decorated the sides with paper pom poms, balloons and bunting. I love this photograph of me and some of my girlfriends from school. 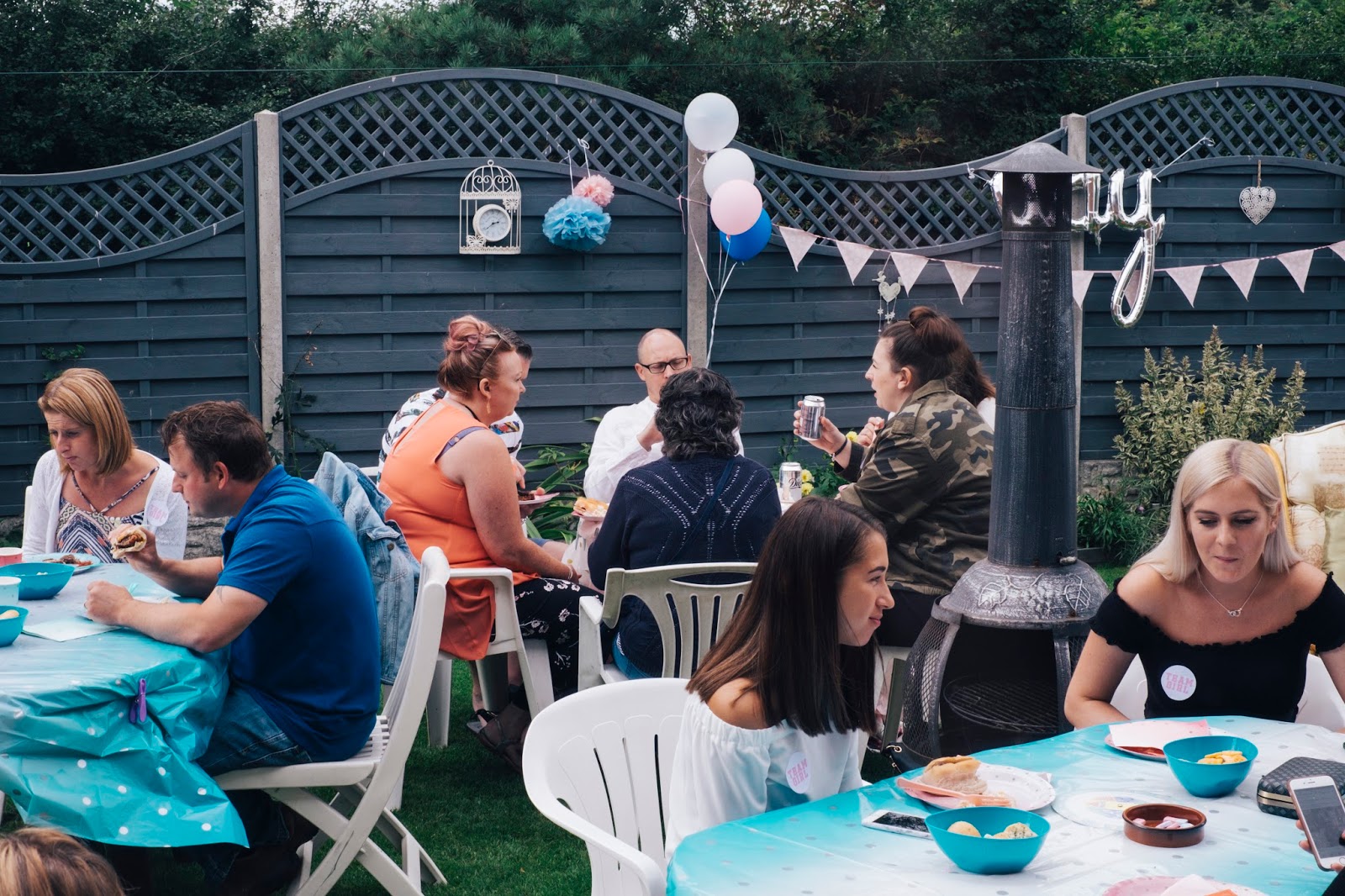 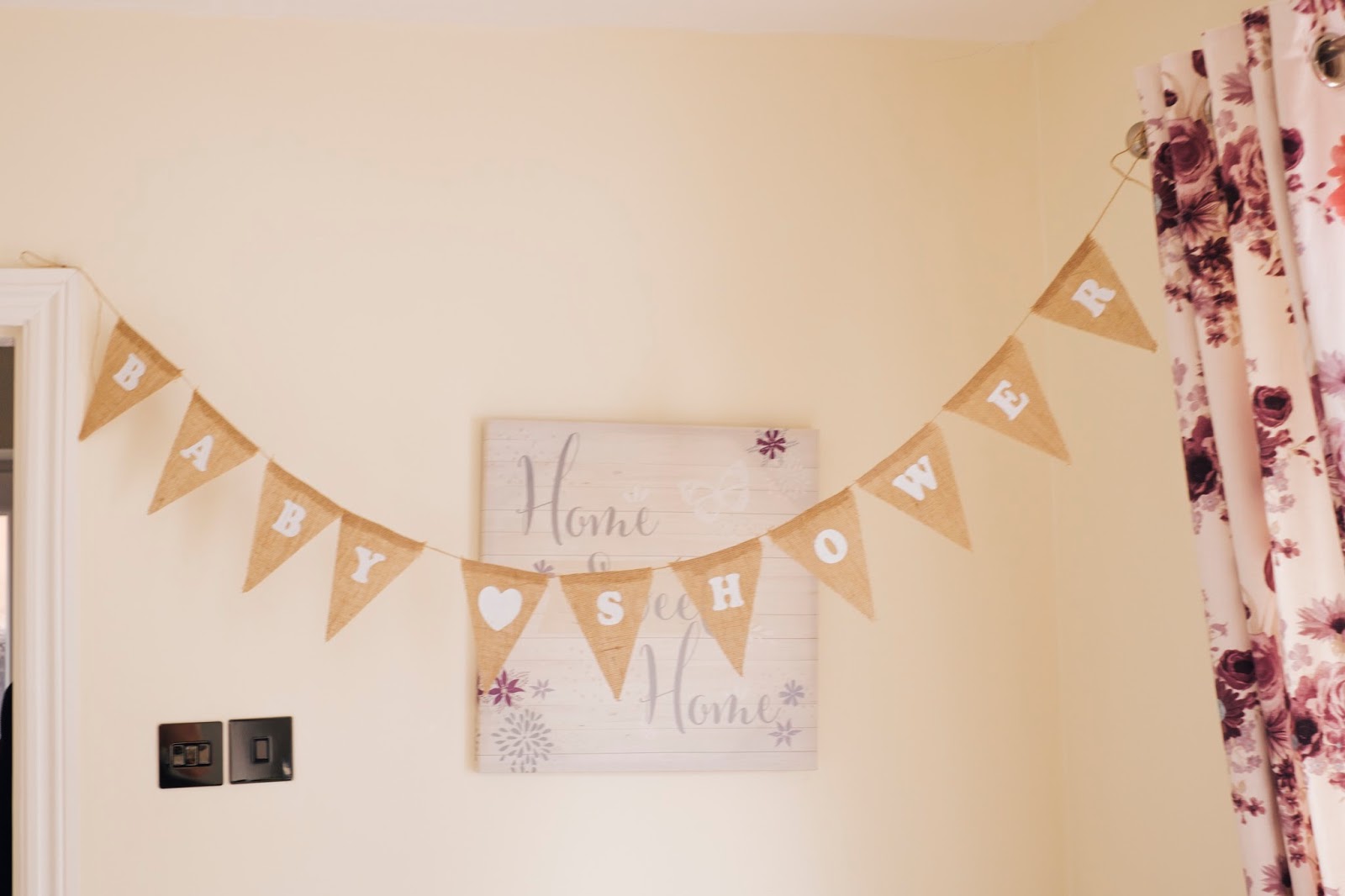 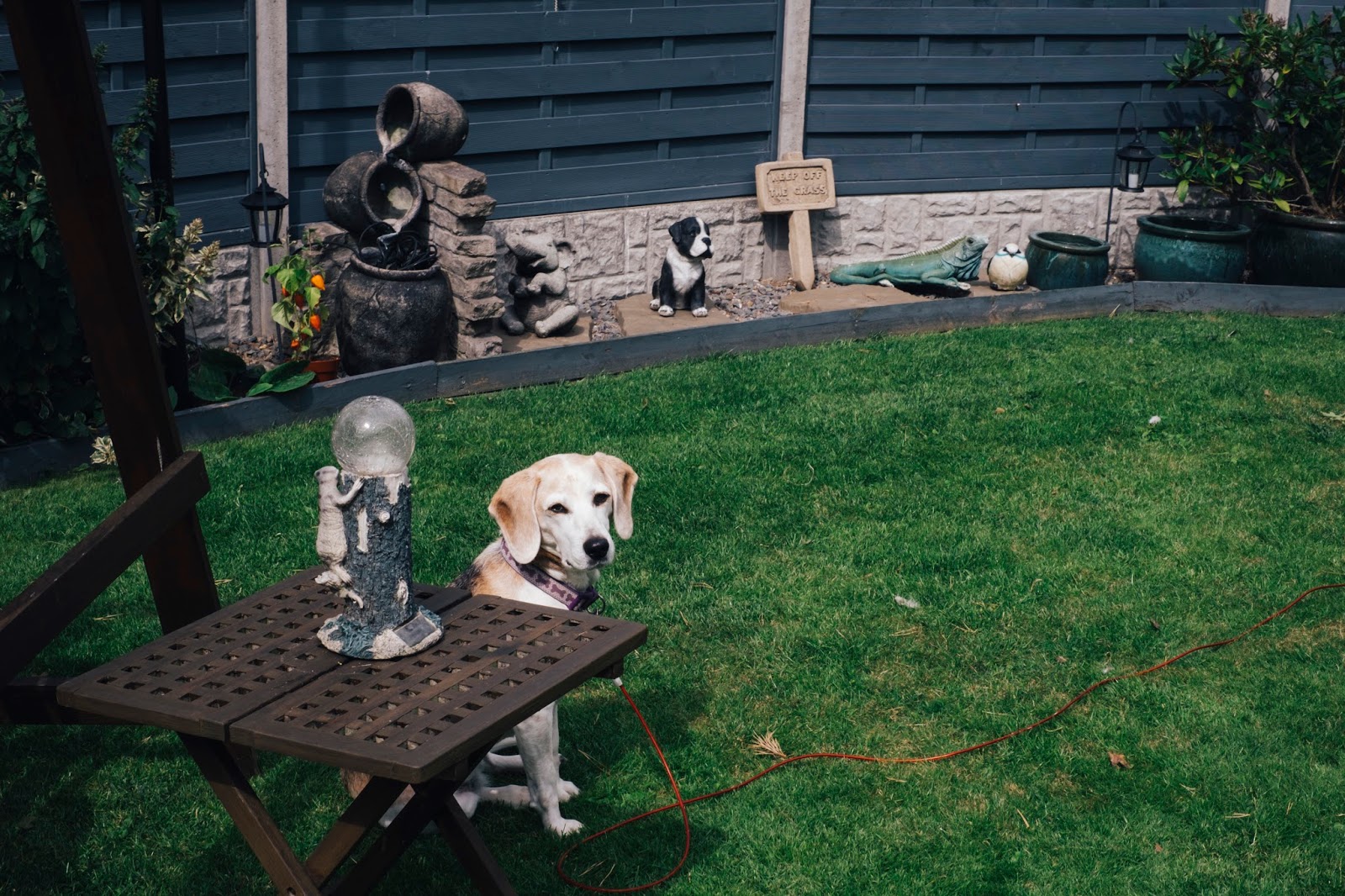 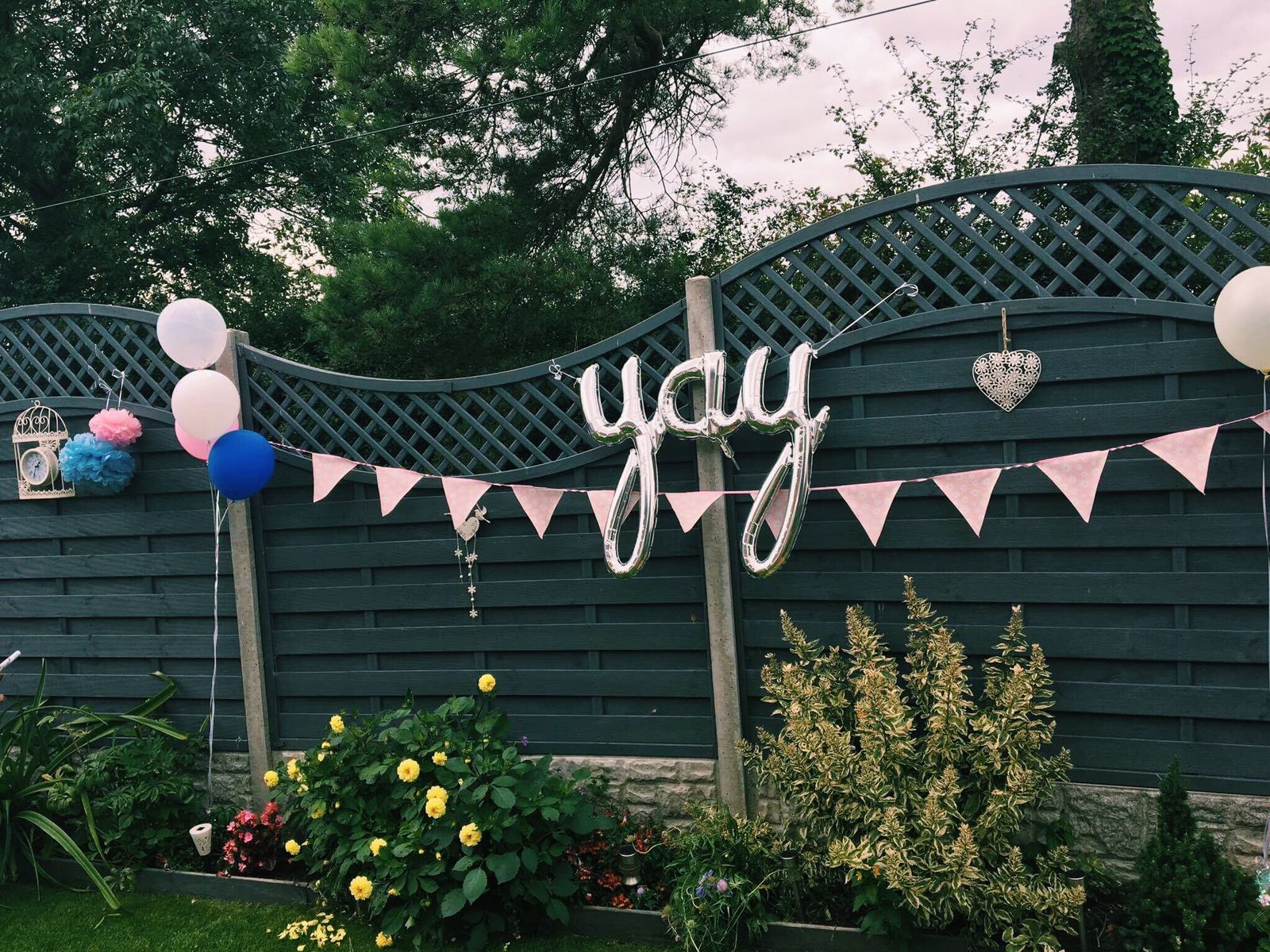 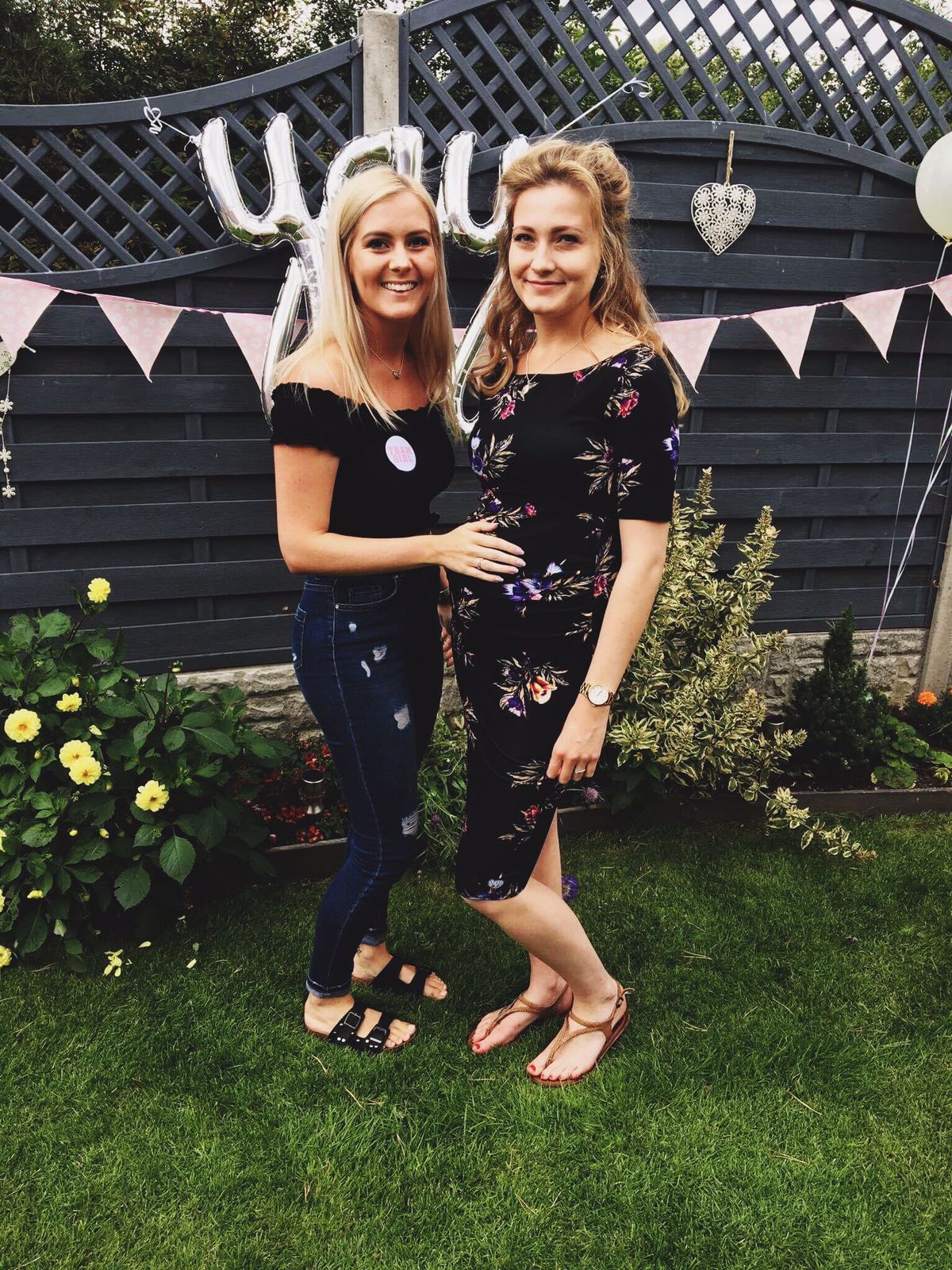 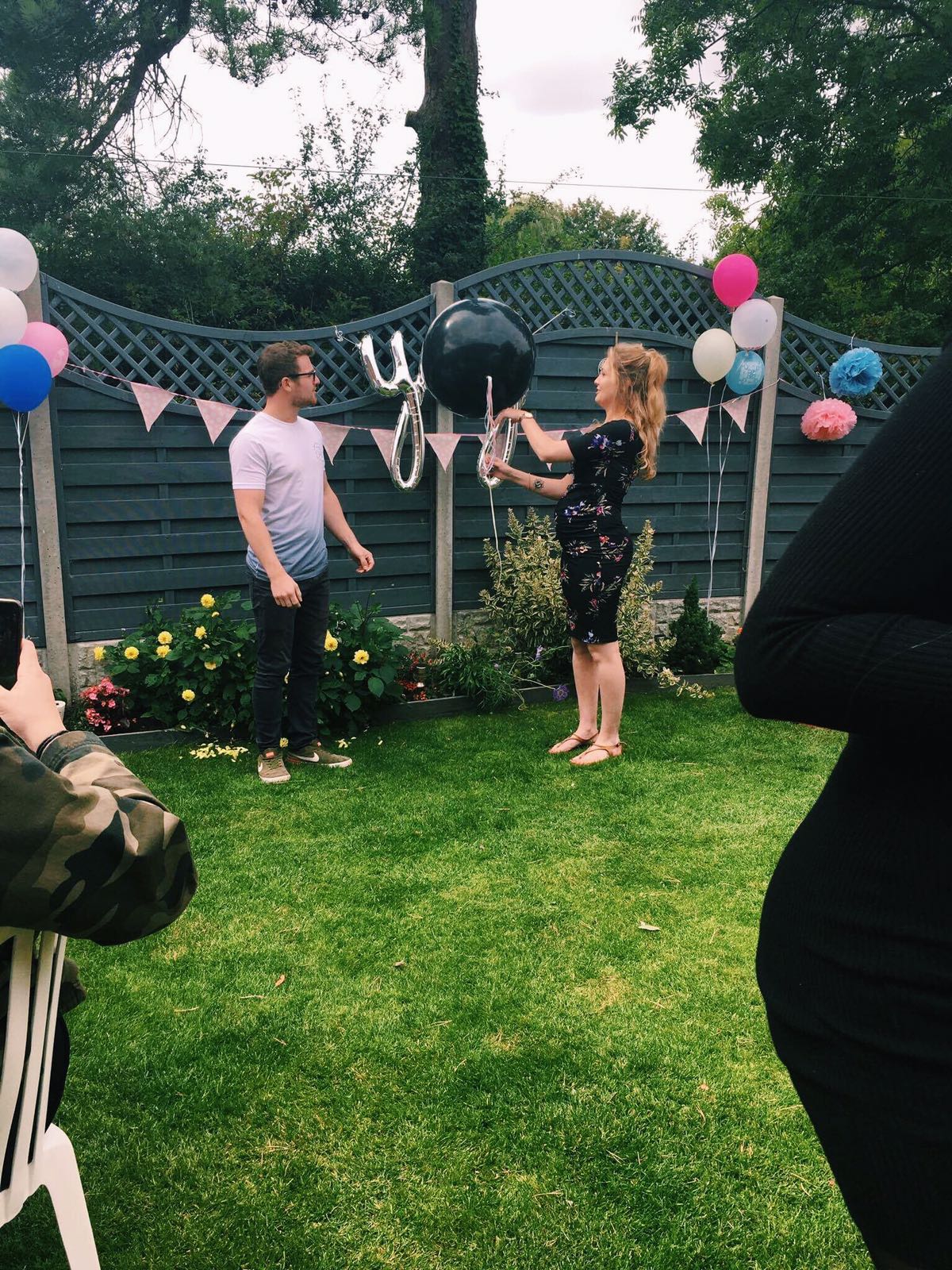 Just before our balloon *POP*. Which is now made a HUGE blue mess all over the garden…(whoops!) 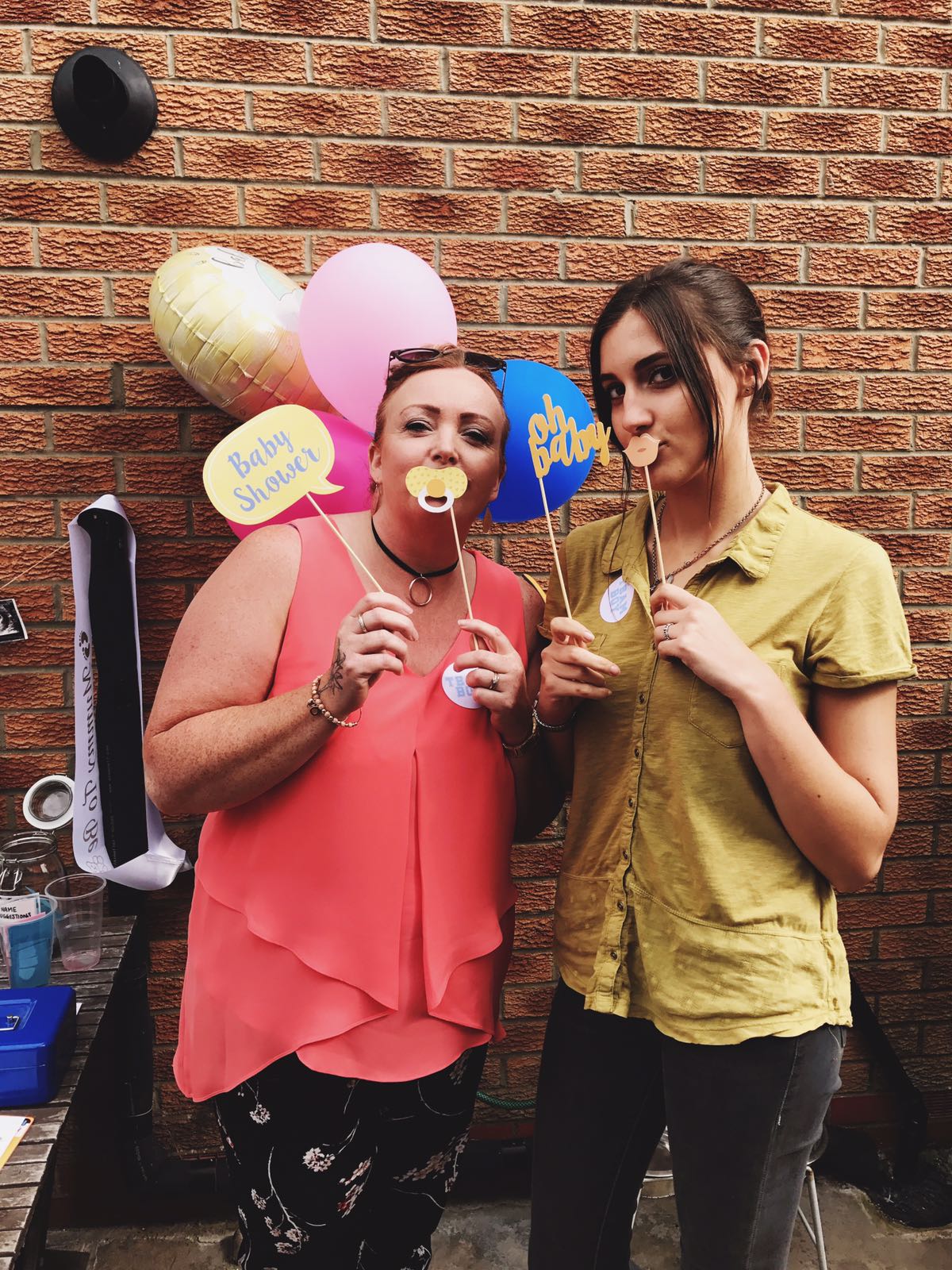 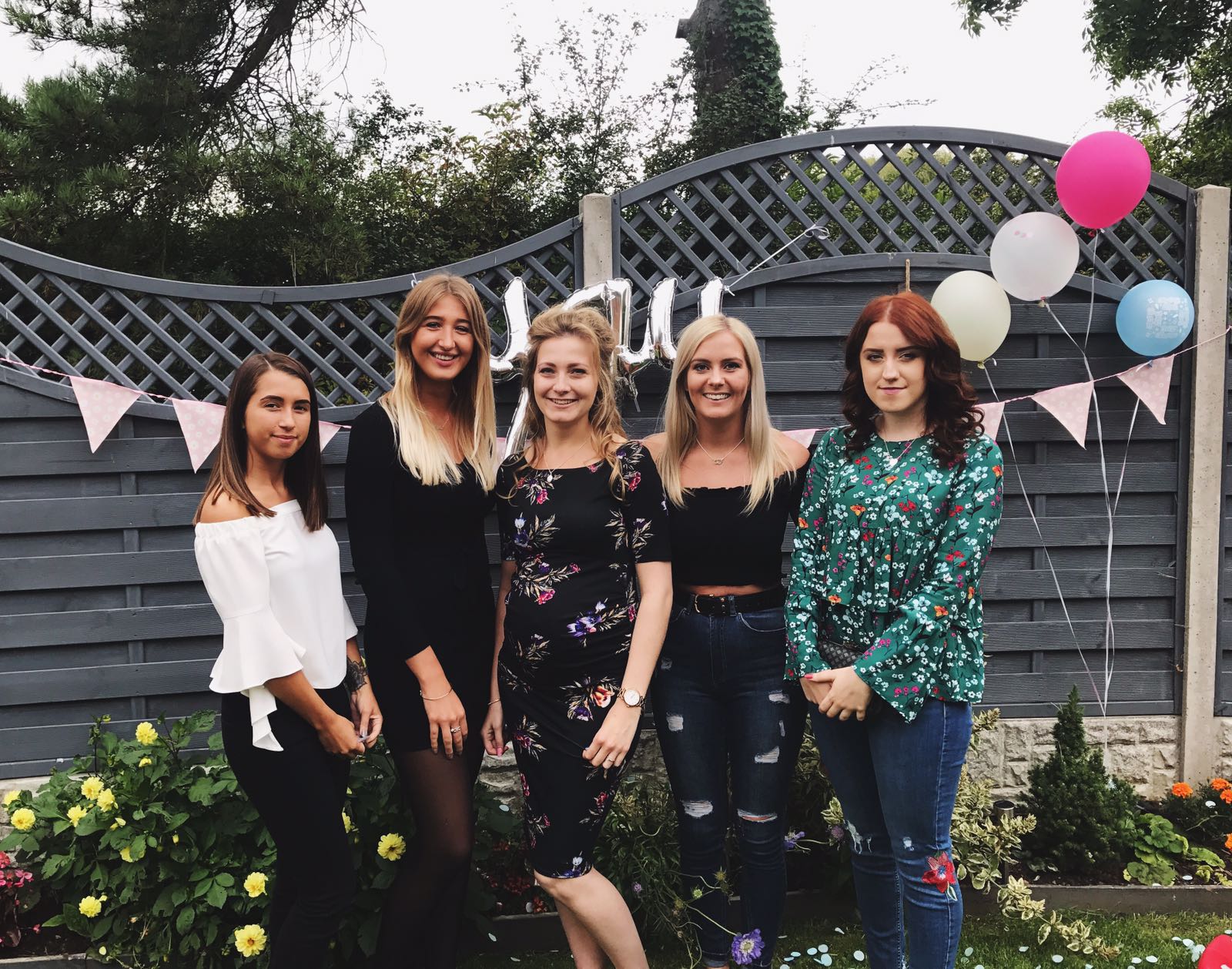 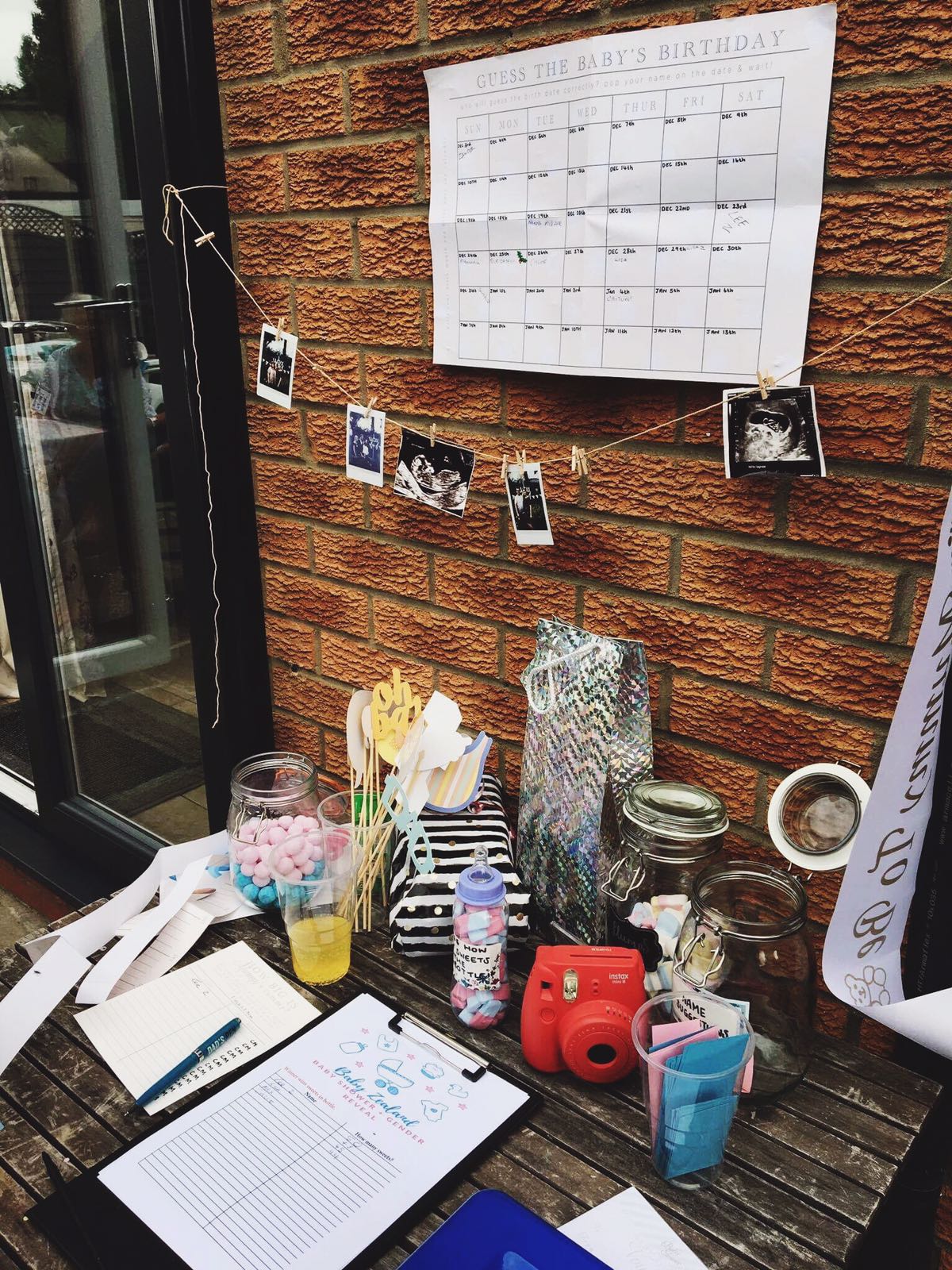 Both I and Bradley had a wonderful time and are so thankful to everyone for making the effort to come celebrate our baby boy’s life before it even begins. We were absolutely showered with gifts, (perhaps that’s why its called a shower!) I think most people love to do a bit of baby-shopping! Every gift was thoughtful and will certainly be used or worn by our little Baby Zea when he arrives, there were even some mummy-pamper-bits for me (yay! sorry Bradley).
I decided to photograph a few bits to add to the bottom of this post to show you some of the beautiful items we received.

(If you gave us a gift and it wasn’t photographed below please don’t feel like we don’t love your gift, I had just picked items which were easy to photograph for this post) 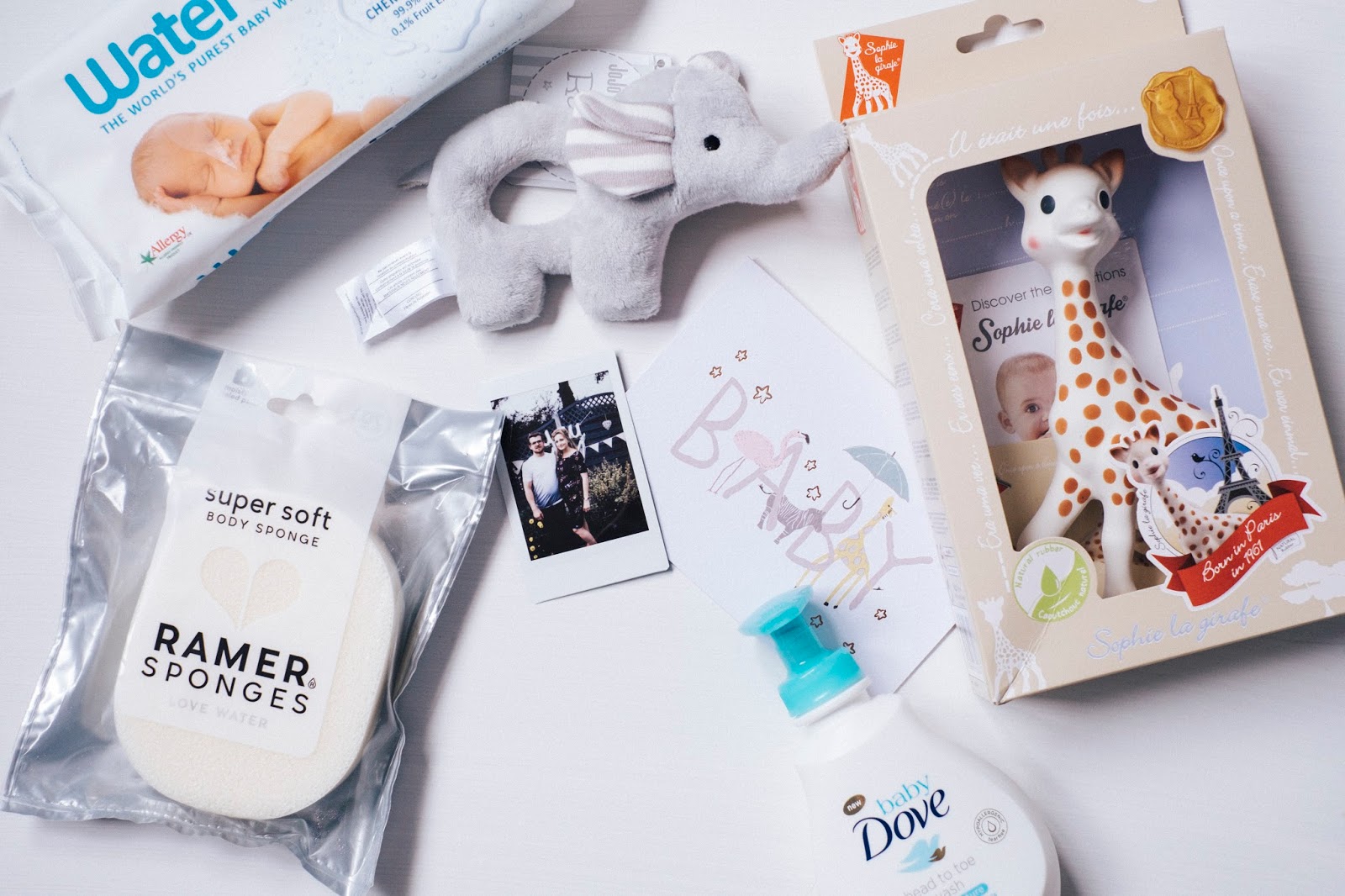 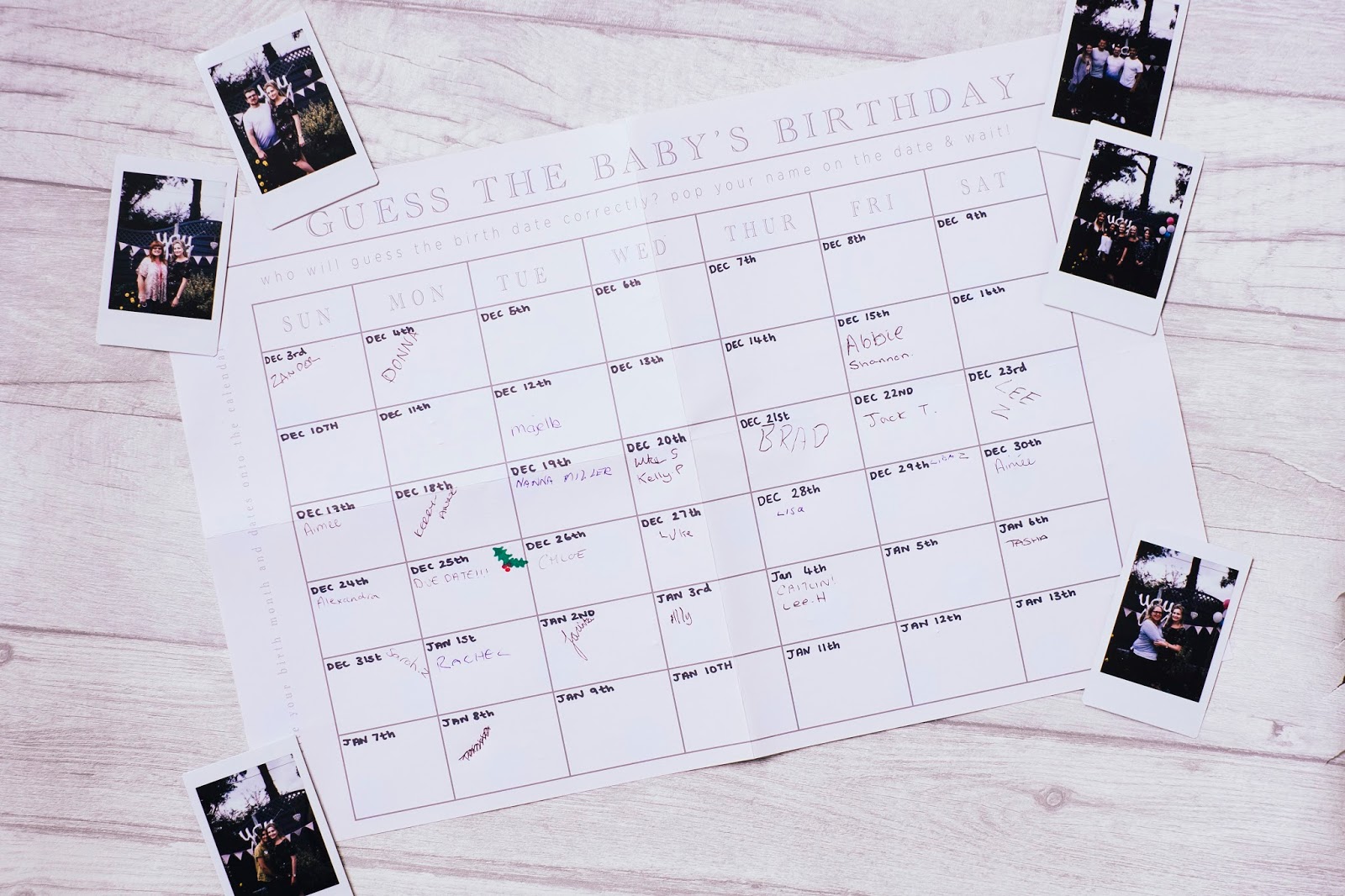 Our ‘guess the babies birthday’ calendar which we’ll be keeping for memories of our wonderful day. I have guess 4th of January! Including some of many Polaroid photographs I had people take with me. 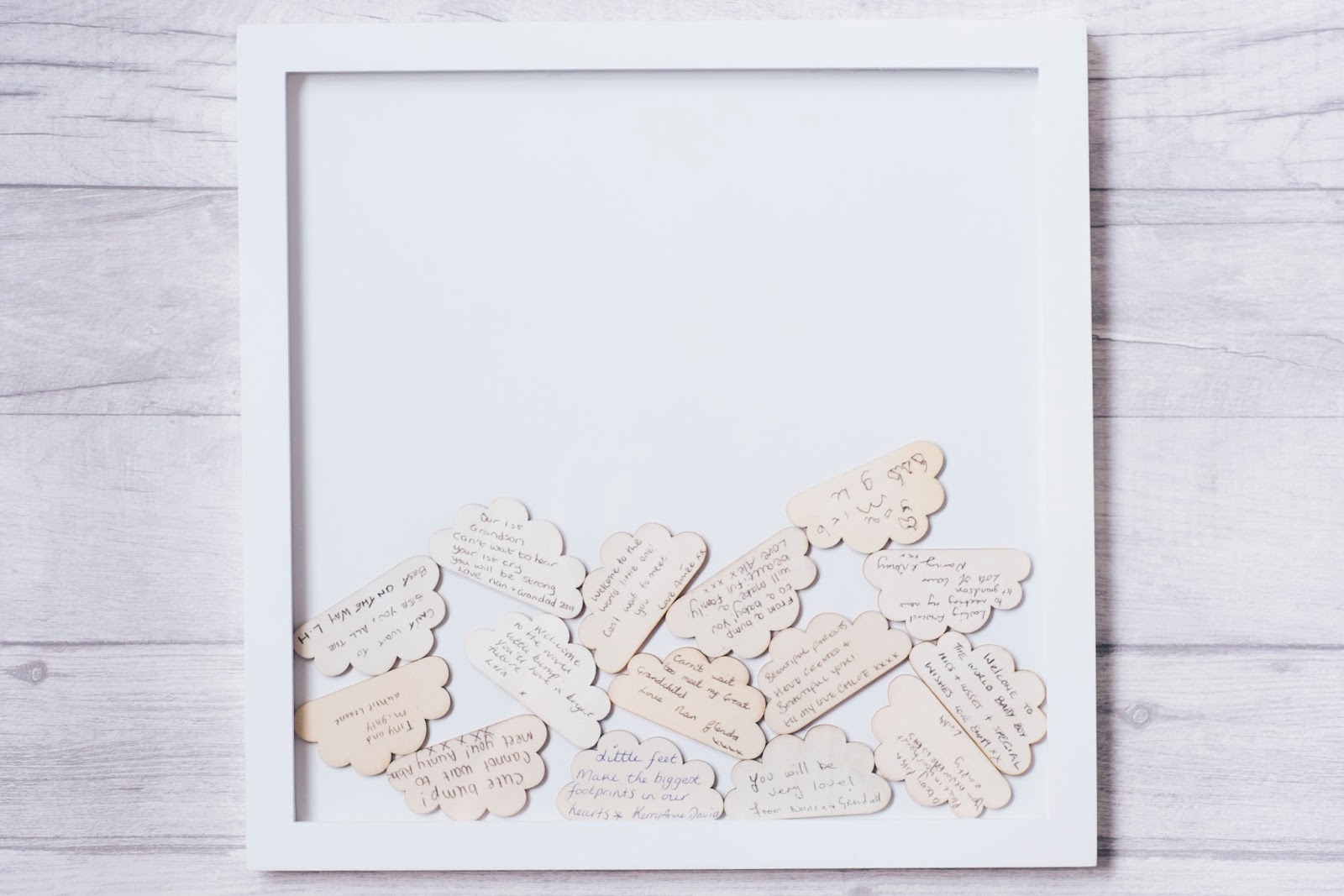 The wonderful gift my little sister Abbie bought us to use at the shower. A photo frame which comes with little wooden clouds for shower guests to write notes for the baby on. There is a small slot on the top of the frame where you can drop the clouds in! 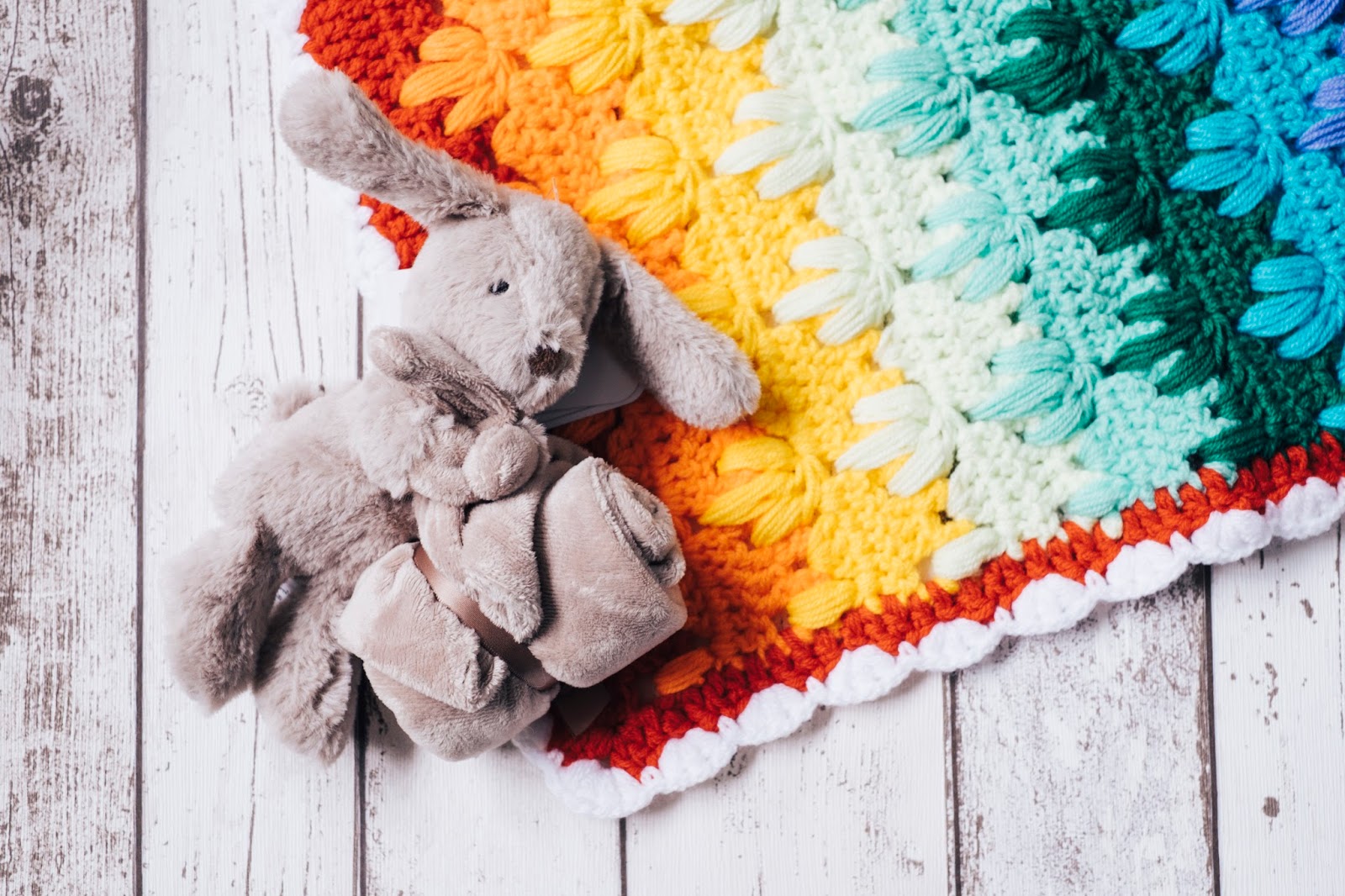 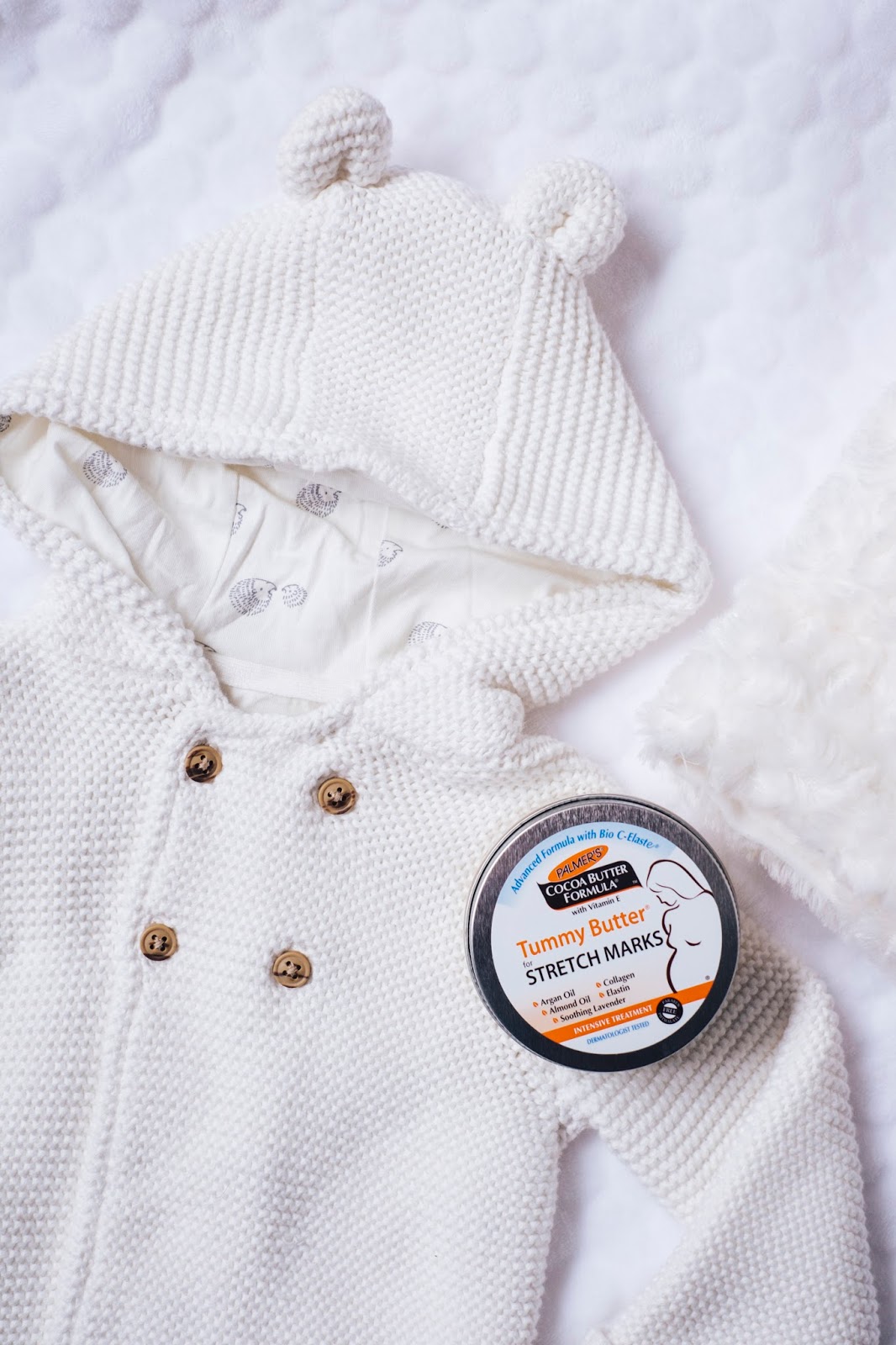 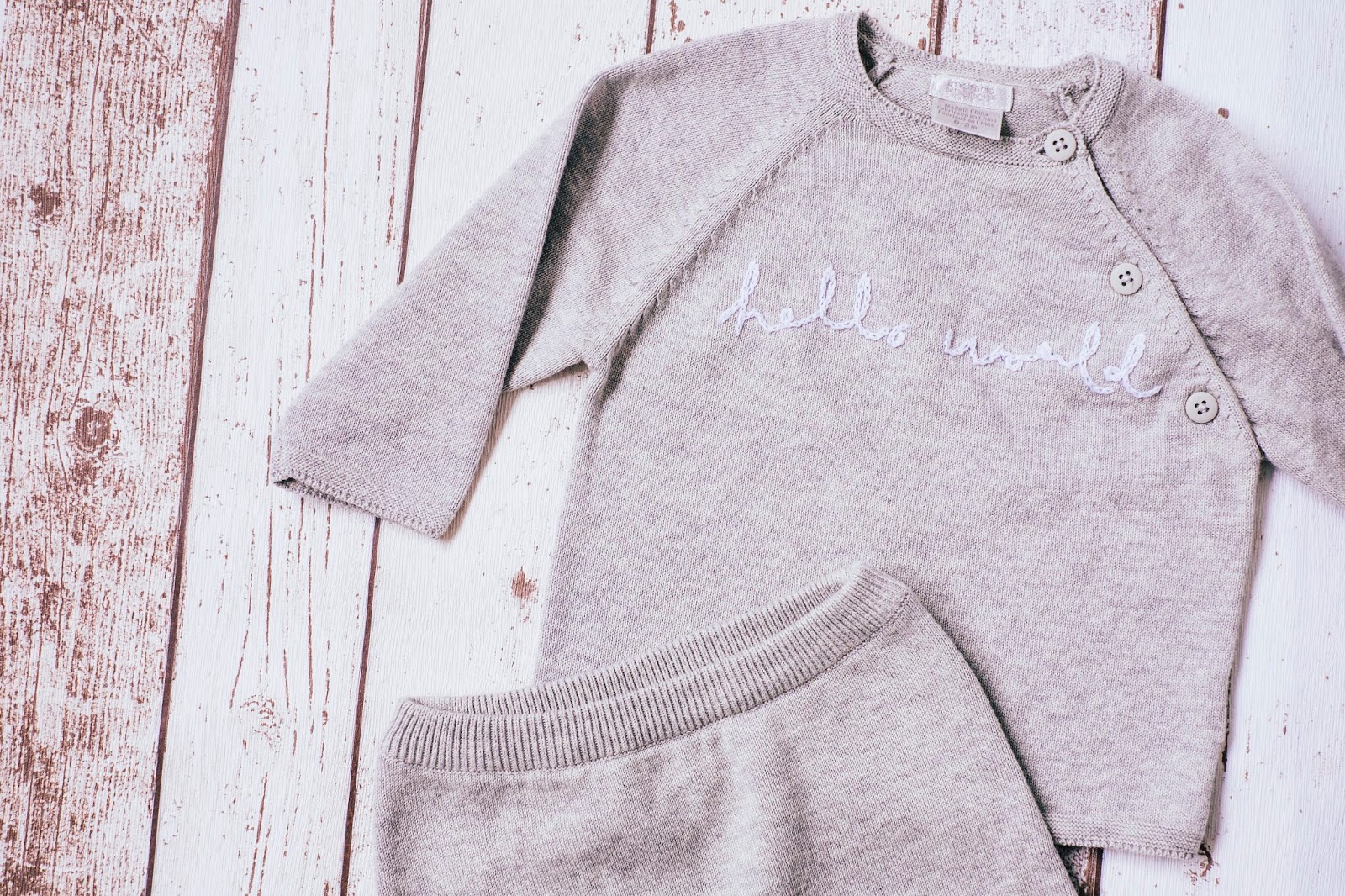 The cutest little gray set from Mamas and Papas which Luke and Jacinta bought for him. The little stitched ‘hello world‘ has me saying ‘awwwwww‘ every time. 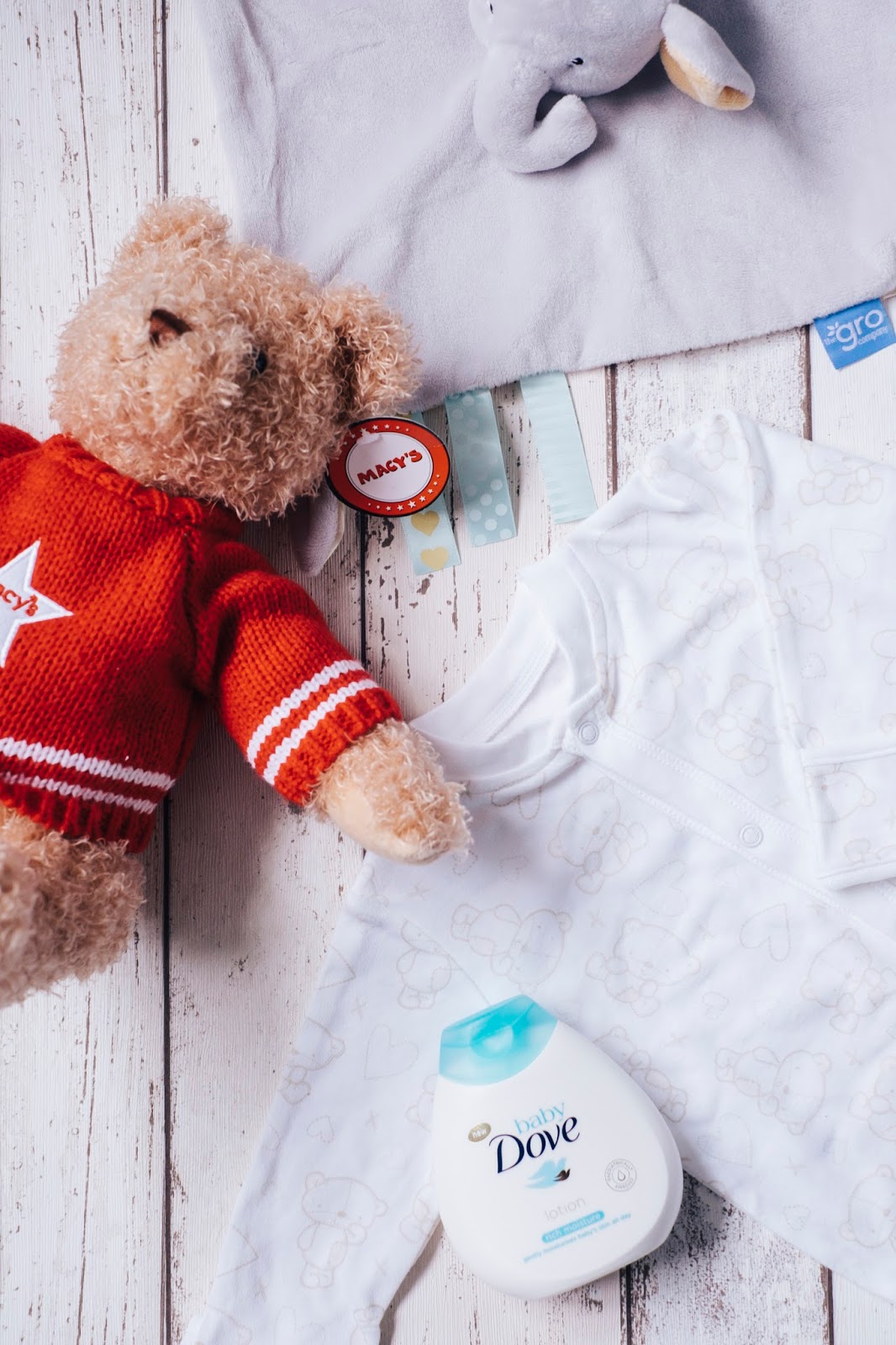 I am loving this Macy’s teddy bear bought by one of my friends mum’s all the way from New York! 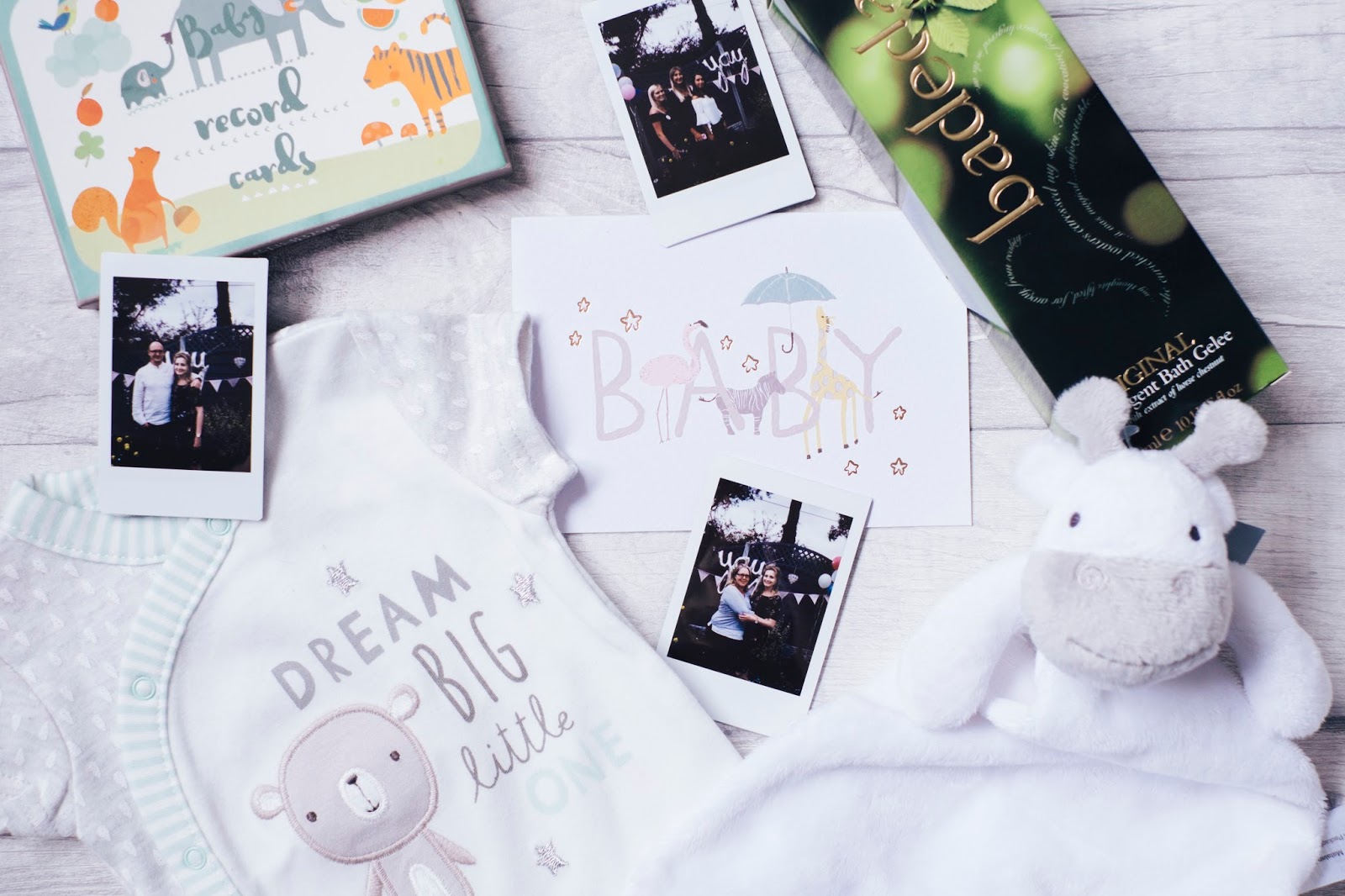 I am so happy, thankful and slightly overwhelmed by all the love and positivity which radiated itself of everyone at the party. It was better than I ever imagined it being and I’m so glad we decided to do a gender reveal to announce the sex instead of just telling people. It made it very special being able to see everyone’s surprised faces all at once!

I am now all partied out and every muscle in my body feels so sore and fragile like I’ve been hitting the gym too hard – turns out 5 hours of standing and chatting can really take a toll on a pregnant woman.

Watch out for my next blog post which I promise won’t be baby or pregnancy-related as I’m sure you all might be a tad bored of me going on about it by now! (I’m just so excited you see!)
I hope I’ve managed to give you some party related ideas if you’re planning on throwing an At-Home Baby Shower or Gender reveal. Any questions on where I purchased items or how I made them just ask!

(This post contains affiliate links which I can benefit from. I only use affiliate sites which I use and trust myself)