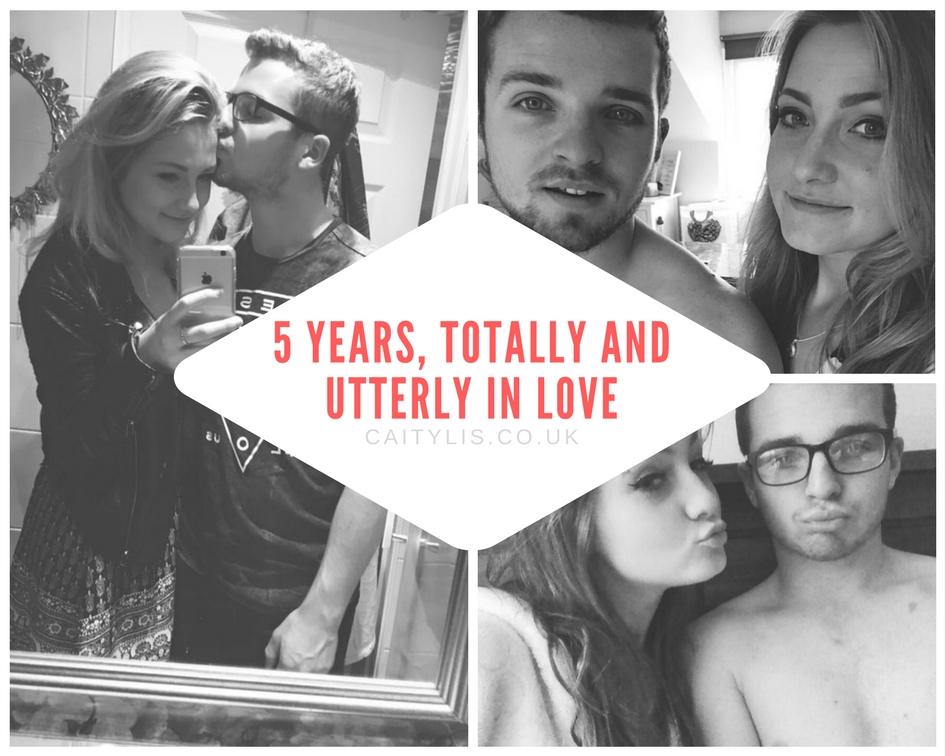 5 years ago today Bradley asked me to be his girlfriend, to which I answered ‘ok’ and ran away to catch my bus. I was just 16 and we had just finished up our fourth ‘date‘ which was at Burger King (romantic).

We met at the bottom of my hill and walked into town, the closer and closer we got to reaching the city, the duller the skies became. That’s when the rain came, the hardest most torrential rain July had probably ever seen. We ran and ran, getting absolutely drenched in the process, until we reached Argos (of all places) to get shelter. We were laughing together while water was dripping from our noses, trying to shake ourselves dry like wet dogs. Later that day I remember wondering if he would ask me to be his girlfriend, I remember wishing he would kiss me, and I remember worrying about my feelings as I had never felt this way before.

Months passed and we would catch two buses across town to see each other. 20th November 2012, I caught the two buses for the first time alone and met him at the end of his road, nervous, to go to his house for the first time and meet his mother. Little did I know how close she and I would become over time, and how similar in some ways we were. Meeting his little siblings, Liam and Leanne who were still in primary school, and now Leanne has her secondary school prom this evening, and Liam is choosing his GCSE’s, it’s strange to see how they’ve grown and how much they’ve changed.

It wasn’t long until we were spending every day and night together, hopping between my mum’s house and his parents, staying out late in Brad’s little red Peugeot 206 with our friends doing stupid things in car parks and causing all sorts of trouble, but everything always seemed so much more enjoyable by his side, I always felt warm and secure, the whole world just seemed like a better place when we were hand in hand.

Years passed and every day was just as enjoyable as the day before, every day was faultless and felt unbreakable. Then in 2015 Brad’s parents decided that they wanted to move to a larger property, and asked if I’d like to live with them, properly, officially. I felt so welcomed and obviously, I agreed. September 2015 we all moved into our new house, we were given this enormous annexe, where Brad built us our very own living space and kitchen, our first ever little ‘space‘ that was ours to share together, and we’ve spent every night here since, and it’s now filled with so many memories.

Roughly 18 months later, I was sat on our bed, Brad walked in and mentioned that maybe we should ‘stop trying to not get pregnant’, I was shocked, I thought I would never hear those words leave his mouth. I had already known I was ‘ready’ for this next stage in our lives but never imagined him bringing up the topic so soon. My heart suddenly felt fuller than it had ever felt before, almost complete, but not quite there yet. The emotions I felt that day were wonderful, I was on a happy ‘high‘ for weeks, I felt on top of the world, completely unreachable and unhurtable. I loved Brad more than I ever thought I could, more than I ever thought was possible, knowing we would be starting something so wonderful together was a magical feeling.

The 18th of May came around, that’s when we first ‘saw‘ our tiny little baby on the screen in the hospital, the most surreal moment of our lives. Watching their little heart beat thump out of their tiny almost non-existent chest. Almost unbelievable that there was a miniature 0.63 inched human-being starting to grow inside me. I remember glancing at Brad who was watching the screen, mesmerized by what he was seeing, our microscopic tiny baby, part him and part me. I reached a whole new level of attachment towards him, my love continuously growing for both him and our unborn child, life felt almost perfect, I could just start to taste the perfection to come.

A couple of weeks later, Friday the 19th of May, I had just got home late in the evening after the gym. I opened the door and begun walking up the stairs to our annex, wondering why all the lights were off, thinking “oh he must be asleep”. I reach the top of the stairs, tea lights are lit, and he walks up to me and I instantly ‘know‘ what this is. He holds both my hands and tells me how much he’s always loved me, how he had known I was the one from the very beginning, and how we’re going to have this beautiful child together, followed by getting down on one knee, opening a tiny box containing a sparkling ring and asking me to be his wife.

Flooded in tears, I, of course, said yes. Now, I am more in love than I ever thought was physically possible. Now this December, our life will be complete and perfect, when our little one joins us and fills us with more love than we will ever be able to comprehend. All with the most perfect man that I couldn’t have even dreamt of, feeling so lucky that I have found my ‘place‘ in this world, and that place is with him.

Hello there, I’m a mother to two ginger-haired toddler, owner to my second house renovation home and soon to be wife to my childhood sweetheart.

This website uses cookies to improve your experience while you navigate through the website. Out of these cookies, the cookies that are categorized as necessary are stored on your browser as they are essential for the working of basic functionalities of the website. We also use third-party cookies that help us analyze and understand how you use this website. These cookies will be stored in your browser only with your consent. You also have the option to opt-out of these cookies. But opting out of some of these cookies may have an effect on your browsing experience.
Necessary Always Enabled
Necessary cookies are absolutely essential for the website to function properly. This category only includes cookies that ensures basic functionalities and security features of the website. These cookies do not store any personal information.
Non-necessary
Any cookies that may not be particularly necessary for the website to function and is used specifically to collect user personal data via analytics, ads, other embedded contents are termed as non-necessary cookies. It is mandatory to procure user consent prior to running these cookies on your website.
SAVE & ACCEPT
×