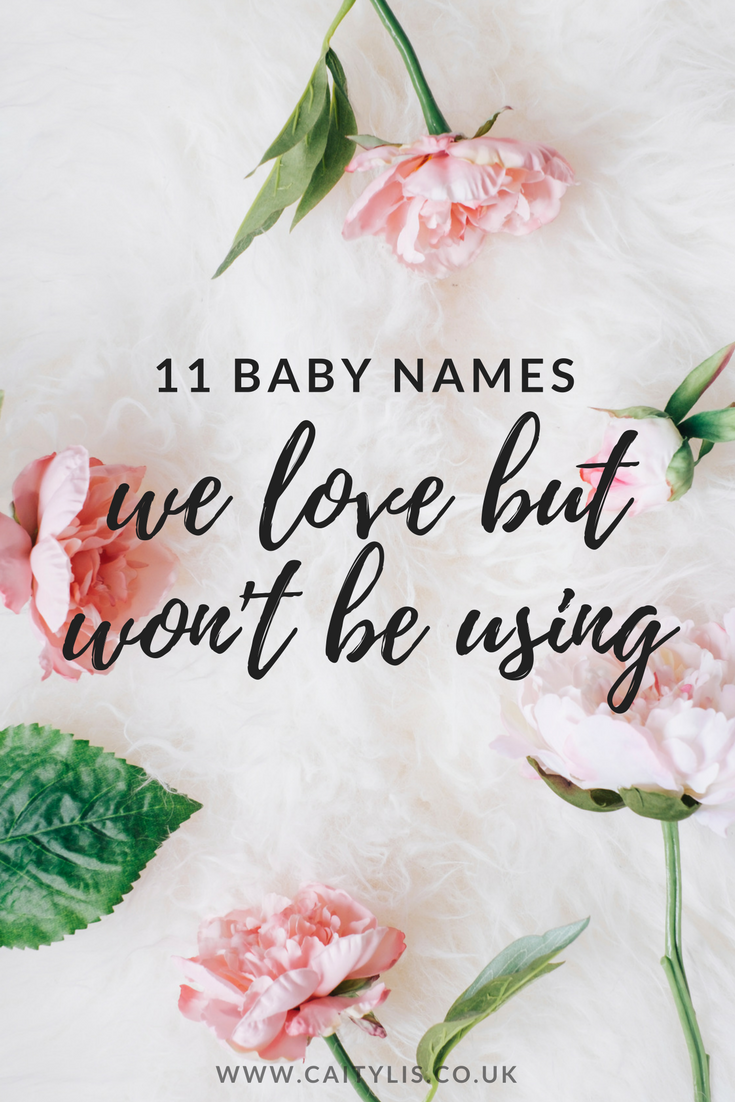 Even though we’re only half way through our pregnancy so far, we’ve already been through 1000’s of names and changed our minds over a million times. We’re still currently waiting to find out whether we’re having a little girl or boy, which will help us actually pin point a name. Although I do believe that we’ve landed on a firm name for each sex now… But will they stick for the next 20 weeks? Who knows.

Personally, I have loved this name since way before we even started thinking about getting pregnant, and I always thought I’d call a little girl it if we had one, but since getting pregnant, I’ve completely fallen out of love with it. Not just that but recently we’ve heard it everywhere! Almost every 2-4 year old is called Evelyn, and Evie for short. We’re really looking for a unique name, and hearing this everywhere just really put us off.

We heard this name for the first time from a character of the series Pretty Little Liars, and we originally really loved it. Since the last name begins with Z we thought it would be really nice to corporate a Z into the first name. But the more and more we said the name the less we liked it. Honestly, I think it’s because it’s very American sounding and more of an older gentleman’s name.

Now, we know this name isn’t very unique, but we just couldn’t help but like it. But the reason we wouldn’t be using it is simply that it sound’s too much like a dogs name. My dad has a dog called Poppy, so firstly that would be odd, but also we have a beagle called Daisy, and Poppy just seems way to fitting with her name to be babies name (you get me?).

I can’t remember how I found this name, but I must have been in the deep dark depths of the internet to be able to find one I had never heard of before. I instantly fell in love, and I actually thought this would certainly be the name if we had a little girl. But people’s opinions on it got the better of me, I couldn’t find one single person apart from Brad that liked it. Mostly everyone said it sounded European or something from a fairy tale. I’m still on the fence about this name, I would love to use it but so many people have said they hate it.

This was the first ever boy’s name we both agreed on and loved. It sounds so adorable, “little baby boy Bobby” and also since we’re decided that if it’s a boy the middle name is going to be Lee, after both our fathers, we thought “Bobby Lee” had a lovely ring to it. The only reason we’ve decided not to use it is that we don’t think it suits a man very well, and we’re not keen on Bob or Robert.

I think this is the sweetest little girls name out there, I love it just as much as I love cats, but to me, it sounds very similar to my name, and I just don’t think that would work in our family unit especially as she grows up.

We’re all about the Z names over here, and as much as we love this name and think it would be such a handsome name for our little chap it just reminds us of One Direction far too much, even though the spelling is different it’s still enough to put us off.

Another name that we love which just sounds too similar to something else. Brad has a little baby cousin who we’re close to called Mya, and we think these two names are far too similar sounding, especially when we get both babies together.

This is one of my favourite boy’s names, but Brad just isn’t as keen on it as I am, he says it’s more like a last name? Personally, I don’t see it, but we want to agree on a name that we both absolutely love so we won’t be using this one.

Another name that is already taken by someone else. There’s a little girl in Brad’s family already called this, and although we’re not very close to them this is still enough to make us not choose this name. We really want something special and unique and we don’t think this name will do that for us.

I’ve left our top top names off this list whilst we still decide which one we will be using for our little boy or girl. I feel like I’ve gotten to the best part of pregnancy so far, I feel great and full of energy (although eating everything in sight). The little bump has really started to come on and is looking so petite and cute right now. Our baby shower is in about a month and I’ve already filled a whole box to the brim with pink and blue decorations…

We cannot wait to tell everyone the sex of our baby, but lips will be sealed from us!